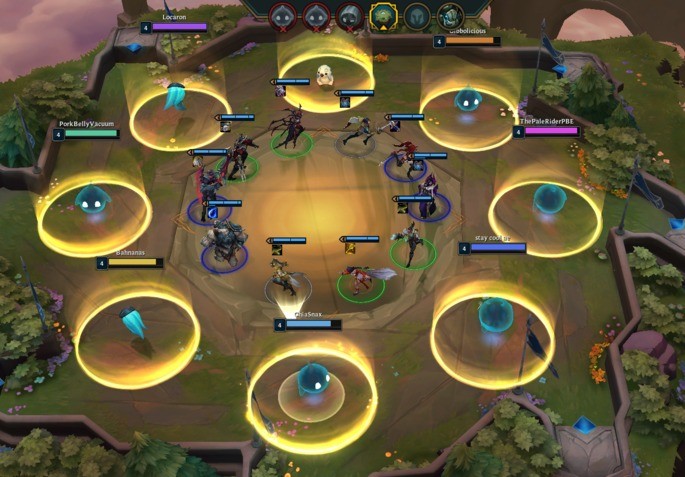 Dota Underlords and Teamfight Tactics are competing games that basically hit the market together. Both are heavily inspired by Auto Chess and, therefore, are extremely similar games. However, there are some differences that need to be mentioned for players who want to decide which game to focus on. Check out the differences between Dota Underlords and Teamfight Tactics below!

This is the most obvious difference between games and that most stakeholders should already be aware of. Dota Underlords, being a Valve game, takes place in the Dota universe while Teamfight Tactics (a Riot game) takes place in the League of Legends universe. This means that in Dota Underlords you will find heroes like Ax, Queen of Pain, Medusa, Sniper, etc., all with their characteristic Dota skills. In addition, the game features iconic items such as Translocation Dagger, Aegis of Immortality, Flush, Divine Rapier etc. Meanwhile, in Teamfight Tactics you can choose heroes like Draven, Pyke, Katarina, Shyvana, etc. Regarding the items you can count on Edge of Infinity, Luden's Echo, Medallion of the Iron Solari, etc. See 8 essential tips to start winning in Dota Underlords!

2. How to play Dota Underlords and how to play Teamfight Tactics

To play Dota Underlords, simply download it on Steam as normal. The game is already available independently from Dota, so you don't need to install anything other than the game itself. To download it, click here . To play Teamfight Tactics, you need to log in and download Riot's Public Testing Environment (APT) from this link . After installation, you will have access to the game. However, please be aware that only players with honor level 3 or above have access to Teamfight Tactics. Thus, the game is still only a mode within League of Legends.

3. Board size and number of heroes

The Dota Underlords board is a standard chess board, that is, 64 squares arranged in 8 rows of 8 (8x8). Thus, the range of skills and items is always measured in squares. Regarding the characters, Dota Undelords has 60 heroes. Teamfight Tactics has 50 LoL heroes and the board is made up of hexagons. The board is also slightly smaller than the Dota Underlords and has 7 hexagons wide by 6 high (7x6). Thus, there is much less space to work and vary in the formation of the units. Meet all the heroes of Dota Underlords and their Alliances!

In both Dota Underlords and Teamfight Tactics, players choose heroes from a random group generated each turn. The difference is that in Teamfight Tactics, the first round and some later rounds have a kind of shared draft called Carousel, in which all players are taken to a new screen where they can choose the next character. In the first round, players must race to choose their hero first than the others. In subsequent rounds, players with less HP have priority in choosing, that is, they will have more chances of obtaining the best heroes or even those specific to their strategies. This acts as a mechanism to facilitate game changers and keep players in the battle.

The item system is perhaps the main difference between Dota Underlords and Teamfight Tactics. In the first, there is no luck involved since, at the end of every neutral round (rounds against creeps), a list of items will appear for the player to choose one of them. If the player loses to the creeps, the list will be shortened. Furthermore, in Dota Underlords there is no way to craft items. All items, even the strongest, are obtained ready. In Teamfight Tactics, there is RNG ( random number generator ) involved in dropping items. They are still dropped by creeps, but there is a chance that you will win the round and not get any items. Likewise, with luck you can drop multiple items in just one neutral round. Another difference is that in Teamfight Tactics it is possible to craft items. Thus, you can use weaker equipment dropped and combine it with others to obtain stronger items. Discover all Dota Underlords items and also all Teamfight Tactics items!

Although none of the games have a mobile version at the moment, Valve has already announced that very soon Dota Underlords will be released for mobile phones. In the meantime, perhaps because it is just a game mode within LoL, there is no mention or prediction of the launch of Teamfight Tactics for mobile.