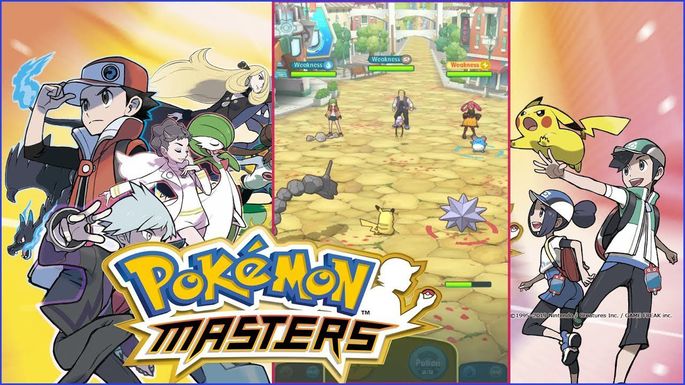 3 vs 3 battles and one Pokémon per trainer

Almost all the gameplay of Pokémon Masters is a new step for the games in the franchise. Starting with the battle system, which completely surprises: there are two teams composed of three coaches each. The one who defeats all opposing coaches wins. Most Pokémon players are used to turn-based battles. First he attacks, then he is attacked and so on. In Masters, the dynamics are a little different. Each Pokémon has its attacks, and each attack uses an "x" amount from your team's energy bar. The amount spent for each attack can be seen in the attack itself. The thundershock Pikachu, for example, is one of the least energy - consuming, while his Thunderbolt consumes twice. So it is necessary to analyze what is the best strategy in each battle, so as not to run out of energy. Of course, while you wait for your attacks to load, opponents can attack you freely. In other words, we don't have turn-based battles, yet they are still not as "free" as you would like. Despite this, the fighting is fluid, fast and even arouses a certain adrenaline in the players.

If you are one of those who like to capture new Pokémon and complete your Pokédex with all the monsters from all regions, Pokémon Masters is not for you. Unfortunately Nintendo and Dena, the game's developer, did not include this option. So don't be surprised that you have to start with a Pikachu and never be able to switch Pokémon again. In the same way, Brock always uses an Onix and Misty always stays with Starmie. All trainers in the game have their Pokémon signature , which are the ones they use most in the drawings.

Not every Pokémon evolves ...

As for the evolution of the little monsters, we have two news: good and bad. The good thing is that yes, one of the coolest parts of the franchise is present in Masters . Virtually all of your peers can have their Pokémon evolving to the maximum stage. Some even go to Mega! But you do not. And that is the bad news. Just as Ash's Pikachu does not evolve, neither will yours. At least so far we know that your Pikachu will be able to reach the highest levels, but it will never become a Raichu. The same can be said of Brock's Onix. In the case of the stone snake, this is explained because Steelix is not of the Stone type, but of the Steel type. This would imply changes that, perhaps, Dena and Nintendo did not wish to include. It remains to be seen whether in future updates at least your Pikachu will be able to evolve.

Narrative does not innovate, but it is full of fan service

In narrative terms, Pokémon Masters does not bring anything very new to the franchise. You'll end up on an island, Pasio, where you'll find Brock and Misty. With them you will form a team, and they are the two that introduce you to the first moves in the game. Here you don't take control of a legendary trainer, but neither are you a beginner. In this title you are side by side with the best coaches in the world. Gym leaders, Elite members of the 4, Champions and other well-known trainers in the series join you in achieving the ultimate title in the Pokémon universe. You will then discover that Pasio is where there is a super competition between these coaches. And you will have to work hard to earn badges and access this tournament. This tournament, however, is just a backdrop for the entire game. In fact, as you go on playing, you forget that such a competition exists. The most interesting is not the Pokémon Masters narrative , but the narratives of the trainers who are their peers. In addition to exploring the island of Pasio, you can get to know your friends more deeply. It is very interesting to do the missions in which the other coaches talk about you. It's one fan service after another! We found out that Brock, for example, does not like to train in his gym, because Onix has more freedom on the street. In fact, these stories are important, because it is through them that you will reach the missions that allow your friends' Pokémon to evolve.

Pokémon is not the same without a team of villains. Team Rocket received a well-deserved rest in Masters , giving way to Team Break. They are your great enemies, appearing very often on your way to disrupt your plans. Nothing you're not used to fighting if you're already a veteran of the franchise. In addition, Pokémon Masters also brings a new teacher. Professor Bellis appears frequently on her journey. Usually she talks about mysteries in the Pokémon world, and in most of her dialogues the conversation is always the same: sync moves . The sync moves are special attacks that each Pokémon has. They are activated after a few rounds in battles, causing huge damage to opponents. A mystery that even Professor Bellis cannot explain.

Heavy gameplay and constant internet access get in the way

Like any mobile game , Pokémon Masters has its mistakes. Yes, it is free-to-play , however it has the infamous microtransactions. Of course, they are not obliged, but you will notice that right from the start it will be very difficult to keep evolving without some extra help that only money can buy. Another problem is that gambling requires constant access to the internet. Apparently he wouldn't need that, as the main campaign can be played entirely on the single player . Many players are complaining that the servers are crashing too often. Some did not even make the first login . In addition, we are talking about a heavy game. Initially you need less than 100 MB to play it. However, the full version, with all files, requires 1 gig and 260 MB of space on your tablet or smartphone . As the game has several technical problems, it is possible that updates will be released. So save space on the device.

Multiplayer is only cooperative

Pokémon Masters has everything to offer online battles between players. However it fails in that too. The multiplayer is only cooperative. You and someone else can do the missions together, but you can't fight each other. Dena falls into the same mistake as Niantic with Pokémon GO , unfortunately.

Is Pokémo Masters worth it?

PROS: CONS: Far from Pokémon Masters is a bad game. In fact, he's great! And Dena has the opportunity to make it even better with free app updates. The developer has already revealed that the first special event, for example, will bring Blue and his Pidgeot to Pasio. For those who don't remember, Blue is nothing less than Gary Carvalho. The company also assured that it will bring new coaches to the game, who have not yet appeared. So if you want to have a chance to battle Ash's Pikachu, you may still have a chance to do so. However, let's not be fooled: Pokémon mobile games do not usually have such a long life. And even those that do, like Duels , end up being discontinued by Nintendo. So yes, it's worth taking advantage of the hype and giving Pokémon Masters a chance . It's a super fun game, with good references to the classic stories of the franchise. Whoever wants a simple, intuitive and fast gameplay , will certainly be satisfied. In addition, the game is free for both Android and iOS systems. FINAL NOTE: 8.5 Datasheet: Learn how to download Pokémon Masters ! Check out 9 tips to do well in the game! Use the best free HTML tools: read the blog, use the online editor, find the tags.