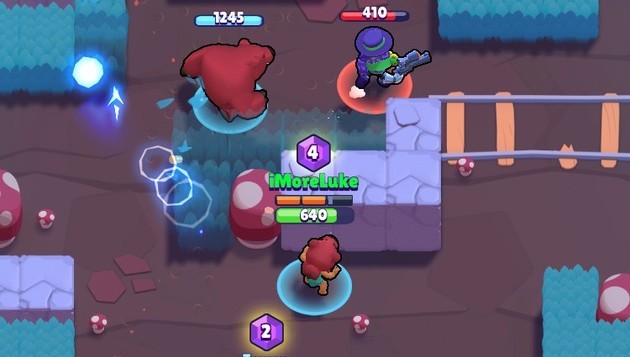 Looking to improve on Brawl Stars? We have prepared some advanced tips for you to learn some important concepts and pay more attention to the details that make all the difference in battles. Check out 8 advanced Brawl Stars tips below!

Practice what high-level players call teasing . Teasing happens when you are behind a wall and move around in order to trigger an opponent's attack. To do this, while standing behind a wall, run and stop just before entering the line of fire. This will often cause the opponent to shoot at the corner you are on, missing the shot (or missing the Super) and resetting your healing time. The tactic is great for when you need to recover ammo and HP. In addition, if you have everything recovered, the chances of your opponent thinking that you will come out of hiding are much higher, which only improves the quality of the bait. At those times, capitalize on your opponent's mistake and go out to kill. Check out the play below:

2. Always keep in mind the concept of spacing and poking

Spacing and poking are not new ideas in the gaming world. Several games, especially fighting games, already use these extremely important concepts that are also applicable in Brawl Stars. Spacing means spacing. It is the safe distance you must keep from your opponents, taking into account the range of your Brawler, the range of enemy Brawlers and the travel time of projectiles. Poking, in turn, is the act of "stoking" or "poking" with your shots. It happens when you enter your ideal distance, attack and leave right away. That is, you should never get into your opponent's range if you are not going to attack. These two concepts result in the pace of fighting in Brawl Stars. For the most inexperienced players, firefighting can seem random and chaotic, but high level players always keep in mind their spacing and the right time to enter, attack and retreat. All movement of the game must be done with a definite purpose.

Mirroring your opponent's movements is crucial against Brawlers who fire many projectiles in a short time, such as Colt, Rico, Pam or Leon. Due to the attack speed of these characters, a good player will always attack while pacing to avoid taking damage. It is exactly in these situations that you need to copy your opponent's movement as accurately as possible to connect your shots. It is true that this tactic requires a lot of attention to your opponent, but many players tend not to vary their zigzag pattern very much, so it is often enough to observe the first moments of combat.

Peek is a term widely used in shooting games and it means “to spy”. In Brawl Stars, it's when you only appear as little as possible to fire your shots and stay protected. The technique is especially effective with Brawlers that have fast-firing animation like Nita, Brock, Jessie, Poco, etc. Basically, get used to your character's shooting timing and practice exposing yourself as little as possible. It is normal that in the beginning you hit many shots on the wall trying to stay behind it. Also, try to combine the peeks with the first tip (teasing) to be more successful.

5. Be as uncomfortable as possible

If you have any experience in MOBAs, you may have heard the term harass (harass / harass) your opponent. This consists of attacking continuously even though the kill will not happen at that moment. The goal here is to keep your opponent on the defensive for as long as possible, forcing him to stay out of combat by recovering and thus gaining the numerical advantage for his team. Often, in a match, one of the opponents cannot get into his game and is constantly pressured, most of the time hiding and recovering. Watch out for these players and capitalize on that. Keep them there.

6. Press and move the front line

In Brawl Stars, it is essential to have space to move around and set up your moves. Having the option of retreating, hiding and changing angles is often the difference between winning and losing. Therefore, whenever your team has the opportunity, try to advance with all players to pressure opponents who have just been reborn. This tactic is extremely offensive and must be done with coordination between the team. Everyone must move forward together and, as necessary, move back together. In an offensive formation, a single dead player can mean the death of the entire team.

In addition to the teasing technique, there are some baits that you can do together with your team. The main one is, when you need to regenerate, run close to a bush where your partner is already. With that there is a chance that your opponent will follow you trying to get the kill and get caught off guard. However, it is not worthwhile to "set up" this trap since it requires a team member to be inactive for a while. Run it only when the situation arises.

8. Move in a chaotic way

This tip is not necessarily advanced but should be mentioned here. Move as chaotic as possible. As the Brawl Stars metagame progresses, players are becoming more and more prepared to recognize movement patterns, so keep yours as varied as possible. Click here for more Brawl Stars tips and tutorials!