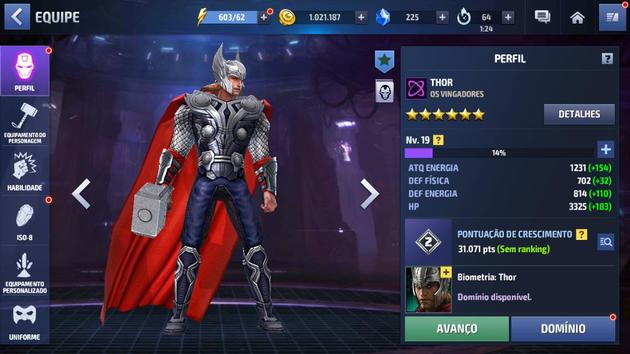 With such a large and varied team of superheroes, it is difficult to know which heroes are the most advantageous in combat. Each character has different characteristics, but we know which are the best! We play with various superheroes and antiheroes from the Marvel HQ universe and this is our selection of the 10 best Marvel Superheroes in Future Fight. Check out! Note: the list is not in any specific order.

Steve Rogers is Captain America, SHIELD's most competent agent and the leader of the Avengers. He is a character specialized in combat and his shield does massive damage to several enemies. As the leader of the group, the physical attack of the main characters increases by 4%. It can do more damage if you face Marvel villains when they are bosses at the end of the level. As a support character, he reduces the waiting time to use the special abilities of the other heroes. Captain America is one of the protagonists of the Story mode and is the most accessible character on the team. His shield attacks are basic, but the strength of this superhero is enough to knock out the most powerful enemies.

Thor is the God of Thunder, defender of Asgard, son of Odin, and an important member of the Avengers. His hammer Mjolnir summons thunder that paralyzes and destroys entire armies. It is the perfect universal category character to have on your list. Putting Thor as Leader, he and the other two heroes gain resistance to attacks by enemies with elemental properties of thunder by 10%. Thor's lightning powers are increased by 3% and that makes all the difference in combat. We can play Thor in the Marvel Future Fight tutorial, and later he can be recruited with a superhero chest. The damage caused by lightning, hammer throwing and summoning lightning turns Thor into an indispensable member of the team.

Peter Parker is the Amazing Spider-Man, a modest New York boy who uses his powers responsibly. He is one of the best, if not the best character in the speed category. It is not strong, but its agility makes it difficult to catch and its cobwebs are perfect for temporarily incapacitating enemies. As a leader in a group with three characters, Spider-Man increases everyone's physical attack by 4%. As a support character, he improves the ability to dodge all characters by 3%. The attack speed also increases by 3%. Spider-Man is practically immune to stunning attacks, thanks to spider reflexes. If you get a special chest, recruit the famous hero without delay.

Venom is one of Spider-Man's biggest rivals and is one of the best allies in Marvel Future Fight. Venom is not like Spider-Man, because his best attribute is not speed, but strength in combat. The Venom symbiote can damage enemies even if they dodge. Even better, Venom manages to regenerate its own health by up to 5%. Unfortunately, Venom is one of the few characters on our list who has no improvement as a leader or support character. Venom is an antihero who can be recruited with a superhero chest and is one of the bosses in phase 3 of chapter 3 of the story missions. Even though Venom is not fast, he still has two superpowerful abilities that help him make up for that failure. If you gain the Infestation ability, Venom grows and becomes faster. But its Mortal Jaw is especially dangerous, as it induces fear in enemies, temporarily incapacitating them.

The Hulk is the Hulk and needs no introduction! Doctor Bruce Banner has been exposed to gamma rays and, when he is furious, turns into a giant green monster. He is an impressive character in the combat category because his strength is so incredible that he can throw heavy objects. The Hulk's strength increases by 3% for each level he rises and his resistance is also very high. However, the hero does not offer any improvement as a support character or as a team leader. The Incredible Hulk can be recruited with a superhero chest and is a recommended addition to any team that wants to level up quickly. The thunder crash, the Hulk charge and the stomp are devastating attacks. The Hulk's fury also allows him to recover some of the lost energy. All of these advantages make the Hulk an important element in the squad of Marvel superheroes.

The famous Groot, of the Guardians of the Galaxy, has many advantages similar to the Hulk. Like the Hulk, he is a character whose specialty is combat. It is almost as strong and its defense is comparable, but Groot is very slow. However, its slowness is offset by its main advantage: it manages to regenerate at the same pace as Venom (about 5%). He is an indispensable support character, despite not having any benefits as a team leader. Groot is a character that can be recruited with a chest or obtained through Dimensional Rift missions. At first, the character is disappointed because he is very slow in attacking. But by leveling up, Groot greatly improves his regeneration and endurance skills. It's a good team member that you can sacrifice to leave a boss at the mercy of the rest of the team.

When Tony Stark wears his armor, he becomes the Invincible Iron Man. He is one of the protagonists of Marvel Future Fight and his main specialty is energy. He is a very accessible character because he can fly and his energy attacks are very powerful. He is a good team leader, as he increases the attack power of other characters who specialize in energy attacks. And like Captain America, Iron Man is one of the main protagonists in the history missions. Iron Man is one of the best specialists in energy attacks. Their physical attacks are not as good as those of the War Machine, but when you unlock Uniraio and Missile Rain, enemies are screwed.

The Ghost Rider belongs to the characters of the universal category and is a tough guy in combat. The chains of the Ghost Rider have an impressive range and he also uses his bike to attack multiple enemies. As a leader, he and his team increase resistance to fire attacks by more than 10%. It is a superhero that can be acquired through a chest and is another highly recommended addition to the team. Flaming-belt attacks have a long range, attacks with a motorcycle are equally powerful and the Look of Penance manages to paralyze rivals for a few valuable seconds.

Carol Danvers is Captain Marvel, a universal superhero and one of the most powerful characters in the Marvel universe. She can fly, she is resistant, she is very fast and her energy attacks are incredible. With Captain Marvel as the team leader, energy attacks increase by 3% if there are heroes in this category and, in general, the damage done to supervillains increases by 4%. It is another character that the player recruits with a special chest. Captain Marvel's photon bursts are very powerful, as well as gust jumps. The superheroine's energy attacks increase with the damage she takes, meaning the less life she has, the more powerful her attacks will be.

The White Tigress belongs to the team of the New Avengers, is an ally of Spiderman and an excellent character specialized in combat. The speed of the White Tigress is the same as that of Spider-Man, although she does not have the superhuman strength of that hero. Increase your team's physical attack and attack speed by placing the White Tigress as the leader. It's another character that you can purchase at the Marvel Future Fight store with a free chest. The White Tigress may not be the most powerful in the combat category, but thanks to speed, she attacks quickly and jumps to the next enemy in an instant. Tigress' best ability is the Ambush, in which she unleashes the spirit of a giant tiger that attacks and temporarily paralyzes several enemies. The new online CSS beautifier website allows you to organize style for websites.