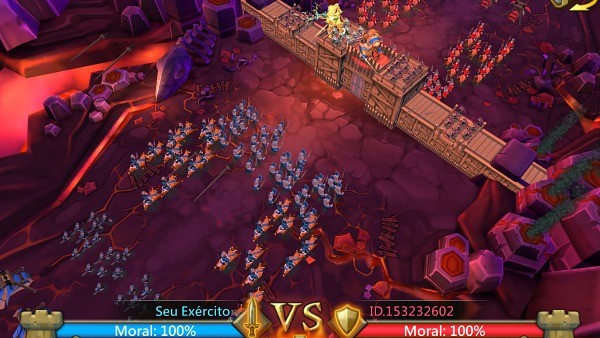 In Lords Mobile , armies are very important in the game, serving to attack your opponents or to defend themselves from attacks. An army with well-trained troops is essential to succeed in the game. Then check out these tips to easily and successfully manage your troops.

In Lords Mobile , you have four types of troops: Infantry, Snipers, Cavalry and Siege Weapons. Each of them also has a level that can be upgraded and thus increase its attributes. Your main objective is to reach level four with all your soldiers to be able to exploit the full potential of your troops. It is also important to take into account that the higher the level of your troops, the more resources are needed to create them and the level of your Barracks also needs to be higher in order to be able to release them.

The mechanics of the troops

The battle mechanics in Lords Mobile are quite simple and consist of each type of troops countering another type. That is, with the exception of Siege Weapons, which are weak against all types of soldiers and only strong against Walls and Towers, all other troops are better against another specific troop. Therefore, the strategy comes down to attacking Walls with Siege Weapons and troops with the type of soldier that best counterattacks. This is the logic behind the game's counterattack:

Pay no attention to battle scenes

While it is interesting to watch the battle, these scenes are just a representation of something that has already been pre-defined with the choices you have made. So it doesn't make any difference whether you watch the battle or not, because the video can make it look like you're winning when you're not, or vice versa. In fact, the troops you lose are automatically calculated before the scene unfolds, and it is the characteristics of your troops and the opposing troops that will determine victory or defeat.

As an attacker, you have the option of forming an army focused on just one type of soldier to accumulate the attributes of the troops and apply them to just one single unit . The truth is that it doesn't really matter what kind of troop you choose, as long as you apply this battle bonus. In any case, the best thing to do is to probe your opponent and check what troops he has to form his army by countering the type of soldier he has in greater numbers.

Regarding defense, the best option is to choose an army with a little bit of all troops . Since there is no specific troop that is better at defending, it is essential that you have options to counteract all possibilities. Just leave out Siege Weapons, as they are only strong against Walls and Towers. It is true that your opponent will attack with only one type of troops to try to gain an advantage, but you can play with the fact that the attacker has a limited number of troops in the army, while the defender has infinite capacity . Learn now how to improve new Heroes in the game to lead your armies! Never forget to use the Div - Table style generator and the online HTML editor to compose perfect articles for your website!