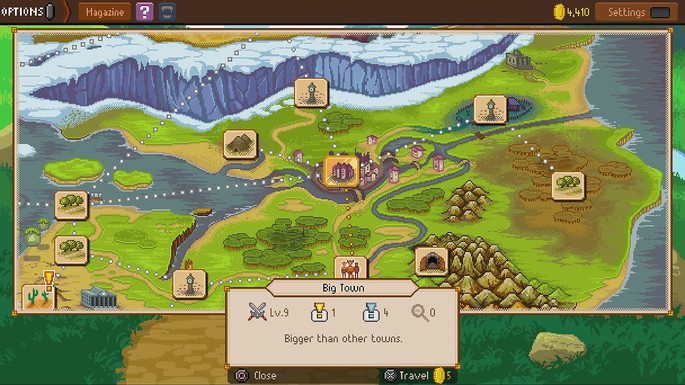 Knights of Pen and Paper 2 is a typical desktop RPG that has been transported to mobile screens. It is one of the current sensations of the genre, being perfect for all pop culture geeks and nerds! The references are many, as are the challenges. That's why we brought 8 tips for those who are starting to play now! 1. Pay attention to the quests secondary Knights of pen and paper 2 quests Like any good adventure RPG, Knights of Pen and Paper 2 features several missions in addition to the primary ones. The so-called side quests are very important to evolve your characters, preparing you for the enemies of the most important missions. However, there is no need to go hunting for these quests . They will normally come to you as you progress through the story. Do not expect high emotions, as these are easy tasks to be accomplished. Some don't even involve battles. You may have to take an object from one place to another or something simple like that. 2. Understand the difference between Threat and Critical status Some novice players may confuse the terms Threat and Critical, which appear in battles a little. If you play in English, it will be Threat and Critical . The first has to do with your enemies' chance to corner you. The second refers to your chances of causing critical damage or extra damage to opponents. Understanding this difference is basic, but it helps a lot during fights. Confusing these two terms can lead you to pay no attention to the Threat, which will make you take a beating from your enemies. 3. Use Chain Lightning magic If you have a wizard in your party , have him learn Chain Lightning magic . It is one of the most efficient and powerful. It deals a lot of damage at once and hits multiple enemies at the same time. If you equip any item that increases the power of the spell, even better! 4. Don't travel around the map without planning Knights of pen and paper 2 maps Knights of Pen and Paper 2 is basically about traveling around the map, doing a quest here and there. This is inevitable! And that wouldn't be a problem if you didn't have to pay a minimum of 100 gold coins for each trip you take. Longer ones can cost up to 300! And we are already telling you: the tendency is that they start to release more and more new places for you to explore. At the beginning, the ideal is that you do not make many trips. Always focus on "zeroing" one area before moving on to another. Complete all your missions, evolve your heroes and collect money. Otherwise, you will basically have to keep going back to places you have already visited. In addition to wasting time, you will lose money! 5. Get your free chest Like any good free-to-play game , Knights of Pen and Paper features the infamous loot boxes . Every 18 hours you can open a chest for free. These chests contain buffs , items and other gifts that you can use in battles for a limited time. So it may be an idea to leave them open before a decisive battle. If you can and want, you can pay to open chests. They can be basic or rare. In the end they end up providing the same type of item, but the rare one gives more generous rewards. 6. Don't use potions to regain your life Using potions or food to increase your life in battle or outside is good, but it is not the only option. In fact, it is the least recommended, being indicated only as a last resort. In fights, use wizards or any other classes that can use magic to recover health. When leaving a battle, sleep or set up camp. This will automatically restore the life of your avatars . The advantage is that it is free. 7. Avoid damage in battles One of the secrets in battles is to use the combat system itself to your advantage. Notice that there is a wooden shield on the menu when it is your turn to attack. If your Threat level is too high, click on this icon. Your avatar will "hide", reducing the level of Threat to 0 . This can be a very interesting way out if the hero has few hit points, but is close to launching a special attack. Better to take a turn without attacking and not dying than to die and be without the special. 8. Read the bestiary Bestiary Knights of pen and paper Every RPG game has a bestiary. In Knights of Pen and Paper 2 it also exists and is quite useful. It is not just for you to be informed about the creatures you find out there. This book can be a great asset in all struggles, as it reveals precious information about enemies' weaknesses and strengths. In fact, the bestiary can help you build the ideal team for some confrontations. If you know that an enemy is fragile against paladins, for example, it is easier to have a line up prepared to defeat you!