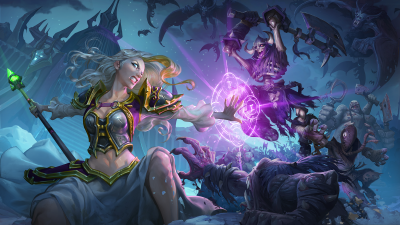 After the Avivar nerfs, Machado de Guerra and Bagata, the goal changed and the new decks are dominating the ladder. Check out which deck is best for you to reach legendary rank. Stay tuned on the best decks in the Kobolds and Catacombs expansion!

The Priest was reborn on the ladder with his Knight Anduin, the Dark Reaper. When the combo is completed with the Raza, the deck becomes an authentic machine gun that never stops causing damage. Arcane Dust: 12000
DECK CODE Copied!

Everyone thought that a rogue deck could not live without Eviscerating, but Prince Keleseth changed that. The deck's strategy is to use Prince Keleseth to buff his minions and, if possible, use Sneak Step to duplicate that buff. Arcane Dust: 10480
DECK CODE Copied!

Even after the Avivar and Uncontrollable Plague nerfs, Jade Druid remains one of the best decks on the finish line. First, you have to quickly increase the mana crystals with Wild Growth, Jade Bud and Nourish. Then, you will control the game with the jades and recover your hand with the Total Infestation.
DECK CODE Copied!

The objective of this deck is to put many minions into play and then use Evolve or Thrall, the Necrovident to improve your minions. The Evil Twins or Saronite Extractors are ideal in this strategy. Then, you can use Bloodthirst to make the final attack. Arcane Dust: 5400 Deck code: AAECAaoIApS9AuvPAg75vwKBBPqqAs + 8AvAH + 6oCoLYCkwmRwQLRvALrwgKbywL2vQKHvAIA

The zoo is back on the ladder with the help of Prince Keleseth. This deck uses discarding mechanics mixed with many low cost minions to become an aggressive deck. Unlike Ladino, on this deck you draw a lot of cards to quickly develop your game. Arcane Dust: 7000 Deck code: AAECAf0GBJG8ApziApfTAsQIDffNArSsAry2AjDOB6gF9wTCCKbOApXOAuvCApvLAuUHAA ==

This is a cheap deck (there is only one legendary one) and very effective on the ladder. You can easily control the game from the start and you can press your opponent well with Hydro Ondomara. Arcane Dust: 3800 Deck code: AAECAR8EkbwCxQjyBabOAg3quwLtCbm0Aq / CAuTCAusHjsMC180Clwj + DLUDqALlBwA =

Mage class fans also have a good deck to fight the ladder on. The deck has several synergies with secrets, such as the Kirin Tor's Maga or Kabal's Crystal Crystals and also has several spells to deal a lot of damage to your opponent. Arcane Dust: 3800