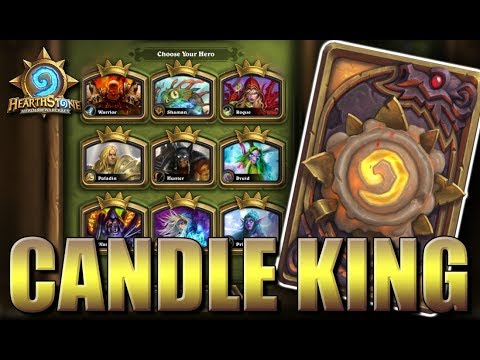 Dungeon Run sessions are a very interesting, but also very challenging, mode. The first levels are easy, but then you will face the most unfair bosses in the game. Learn how to build the perfect deck for the Kobolds & Catacombs adventure! See our tips with the best choices of Passive Treasures, Active Treasures and important cards to beat all bosses with all classes. Important tip: if you don't get one of the best Passive Treasures after defeating the first boss, the ideal is to give up on the next game to start over. In this way, you will always start well to face the 8 dungeon bosses. Learn how to reset Monster Hunt from the Witches Grove expansion!

With Druid, you can choose two types of strategy: large minions or Jade. If you choose the first, you will need to pick up the Summoning Scepter and Crystal Gem to focus on a good ramp. If you want to take the easy route, get Jade cards by choosing the Battle Totem passive .

Build your deck by building synergies with C'thun and Jades. With the passive treasures of Battle Totem and Totem of the Dead , you will gain a lot of advantage with the Last Sigh and Battlecards cards. With Active Treasures, you will speed up your game a lot. If you are unable to get these Passive Treasures, take the Mage's Robe and look for damage cards like the Lunge and Knife Fan. The Invisibility Cloak is also useful for protecting your minions.

The strategy of Shaman is very similar to that of Ladino. Invest all the synergy in Jade and you will manage, in a few turns, to create giant Jades with the support of the passive Battle Totem.

The Hunter is a flexible class in the Dungeons. You can create a deck with high cost Beasts and use the Summoning Scepter. There you will get Active Treasures to buy cards like the Bag of Crumbs and download minions with the Boots of Haste . Another strategy will be to focus on the Dead Totem , as the Hunter has a lot of Last Breath cards.

The combination of the Justicar Ring and the Captured Flag will guarantee you a table always with 2/2 minions. Dr. Cabum's Robombas (7 1/1 minions that can deal up to 3 random damage points) work very well in this strategy.

With Warrior, you will bet on weapons. There are many cards to upgrade weapons and you will get a lot of damage that way. In addition, there are special weapons like the Dagger Vorpal and the Greedy Pick . Plan B to win with Guerreiro is the use of large minions. Use the Scepter of Summoning and the Boots of Haste to be able to lower these minions more quickly.

The Warlock is a somewhat complicated class for the dungeons. You must focus your strategy on large minions like Mal'ganis and Chaoslord, who can lower more quickly with the Summoning Scepter . Play as a control or handlock deck.

With Priest, the difficulty increases a lot. Spells can be very powerful if you take the Magician's Robe and cheaper with Khadgar's Scrying Orb . If you download Lyra, Prima Solar will be able to cause danger. The Invisibility Cloak passive can be important in protecting your most important minions.

Mage is considered the most difficult class for catacombs. The strategy is similar to that of Priest, however, it does not have cards as effective. Try to take direct damage cards like Fireball or Flame Strike to remove enemy minions. An interesting tip is the combination of the Coin Exchange with Antonidas, which may offer several Fireballs to shoot in the face. Have you heard about the new Hearthstone expansion? Know everything!

How to defeat the final bosses

When you reach the eighth and final boss of the Dungeon, you will encounter opponents with a very unfair Heroic Power. All 5 final bosses are difficult, but there is always a way to win. Check out!

Devour (0 Mana): Remove 2 cards from the top of the opponent's deck. Azari the Devourer is a boss with a very unfair mill strategy. He is probably the most difficult boss of all and you can only ignore his Heroic Power. It is very annoying to constantly lose important cards, but you have to move on. Try to be more aggressive from the start and put minions on the table to trade with Azari's demons. If you manage to get the Active Treasure, Boots of Haste, you can download strong minions too soon to pressure the boss. Good luck!

Surrounding Darkness (0 Mana): Summon a 5/5 Dark Spawn. You start your battle with The Darkness with 3 Luminous Candle cards to destroy all the 5/5 Dark Maids. You must not rush to use the Candles and expect the boss to have at least 3 on the table. The best strategy for defeating The Darkness is to try to stretch the game to fatigue . He draws a lot of cards and will get to fatigue faster than you. The Passive Treasure Potion of Vitality can be very useful to withstand this pressure.

Vengeful Breath (0 Mana): deal 1 damage to all enemies for each missing Master Chest. You will find the 5 Master Chest at the table very tempting, but you will have to ignore them if you want to win . It is true that the rewards are very useful, but the damage of the Heroic Power will be more and more aggressive. Vultrasz will use spells to upgrade the Master Chest, but you should only destroy them as a last resort. Place several strong minions on the table so that they can take the boss's Heroic Power and attack it.

Magic Candle (3 Mana): Find a Treasure! In this battle, you will need luck to be on your side. King Fubalumba will use Heroic Power to collect the Dungeon Treasures and some of them can be fatal. If, for example, he finds the Boots of Haste , he can download many very strong minions. The best way to deal with King Fubalumba, in addition to trusting your luck , is to keep spells to remove the biggest threats. You must play without rushing, but at the same time, damage it.

Passive : end of turn wins a Freixe card Xol, Incólume is a warlock class boss who uses the discard strategy to complete the Mission: Lakkari Sacrifice. To complete the Mission, the boss will use Freixe's cards to delay you. Fortunately, you get to know which Ash cards the boss gets from the word he says whenever he generates a card. The best strategy for defeating Xol is to wait for it to complete the Mission and then force it to discard the Etheric Portal through the Demonic Howler. Afterwards, you only have to deal with Freixe cards and focus on causing damage to the boss.

When you clear the Dungeon with all classes , you will earn the "Dungeon Master" card back. It seems too little for the effort and hours dedicated to beating the powerful bosses, but you have to see this reward as a special Hearthstone medal. Many players argue that the reward could be better, such as winning some packs, gold or arcane dust. In the "Ice Throne" expansion, the adventure reward is the Paladin skin (Arthas). However, Hearthstone seems to have taken the right path with these challenging and free adventures.