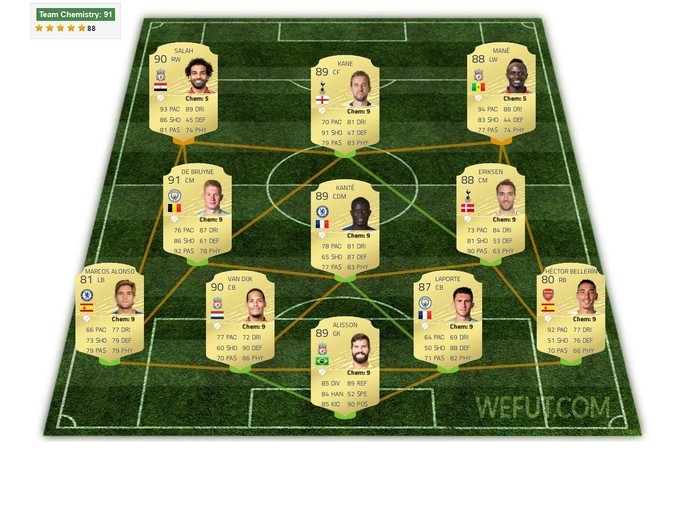 In the last few years the Premier League has evolved a lot in terms of quality. Today it is one of the most popular, rich and disputed national leagues in the world. In FIFA 20 she arrives with some of the best players in the game, especially in offensive positions. So if you're a fan of FIFA Ultimate Team or even in Career mode, it's important to know who are the best Premier League players in FIFA 20 . We separated them by position below, in addition to including a Dream Team from the competition at the end of the article!

Alisson is the third best goalkeeper in the entire game, but is literally number one in the Premier League. Nothing more natural, since he was champion of the Champions League with Liverpool. De Gea is right behind, with the same 89 as Overall. You lose the first position just because Alisson has a higher Potential.

Bellerín is FIFA's best right back again . Despite the overall low in edition 20 , he stands out for his high speed and for being one of the best offensive sides. This support makes him a great winger or even an interesting right midfielder.

Following the same path as Bellerin, Marcos Alonso has a low overall. This, incidentally, is the hallmark of the Premier League side. Despite this, he is a good defensive back, mainly because he has 90 resistance.

Van Dijk was champion of the Champions League and is the best defender of FIFA 20 . Laporte, only 25 years old, has made a good progress since the 17th edition , and today has 87 of Overall. In the list you notice the presence of the two giants of Tottenham, but also note that names like Otamendi have already left the TOP 10.

Kanté remains at the top as the best midfielder in the Premier League. Fernandinho and Fabinho remain well rated, but now with Tottenham's Rodri. Of course, Paul Pogba could not be missing from the list.

De Bruyne does not leave the position of FIFA best midfielder , with 91 of Overall. Right behind comes Eriksen, David Silva and Bernardo Silva. Names that were once gods of the midfield, like Özil and Mata, also figure in the TOP 10.

Liverpool are very well served. Salah and Mané have a great Overall and completely dominate the Premier League. Hazard's departure for Real Madrid, of course, made this a little easier.

Harry Kane keeps climbing from one FIFA to the next. At 20 he has 90 Overall and can still reach 92 in Career Mode. Agüero and Aubameyang close TOP 3. We highlight Korean Min Son, as well as Firmino and Lacazette.

All positions are filled with weight names. It is no coincidence that the Premier League Dream Team has an overall average of 91. This team does damage in any FIFA 20 mode . Now you just have to get all these players together in your squad. The best FIFA 20 players by position! See all players FIFA 20 icons !