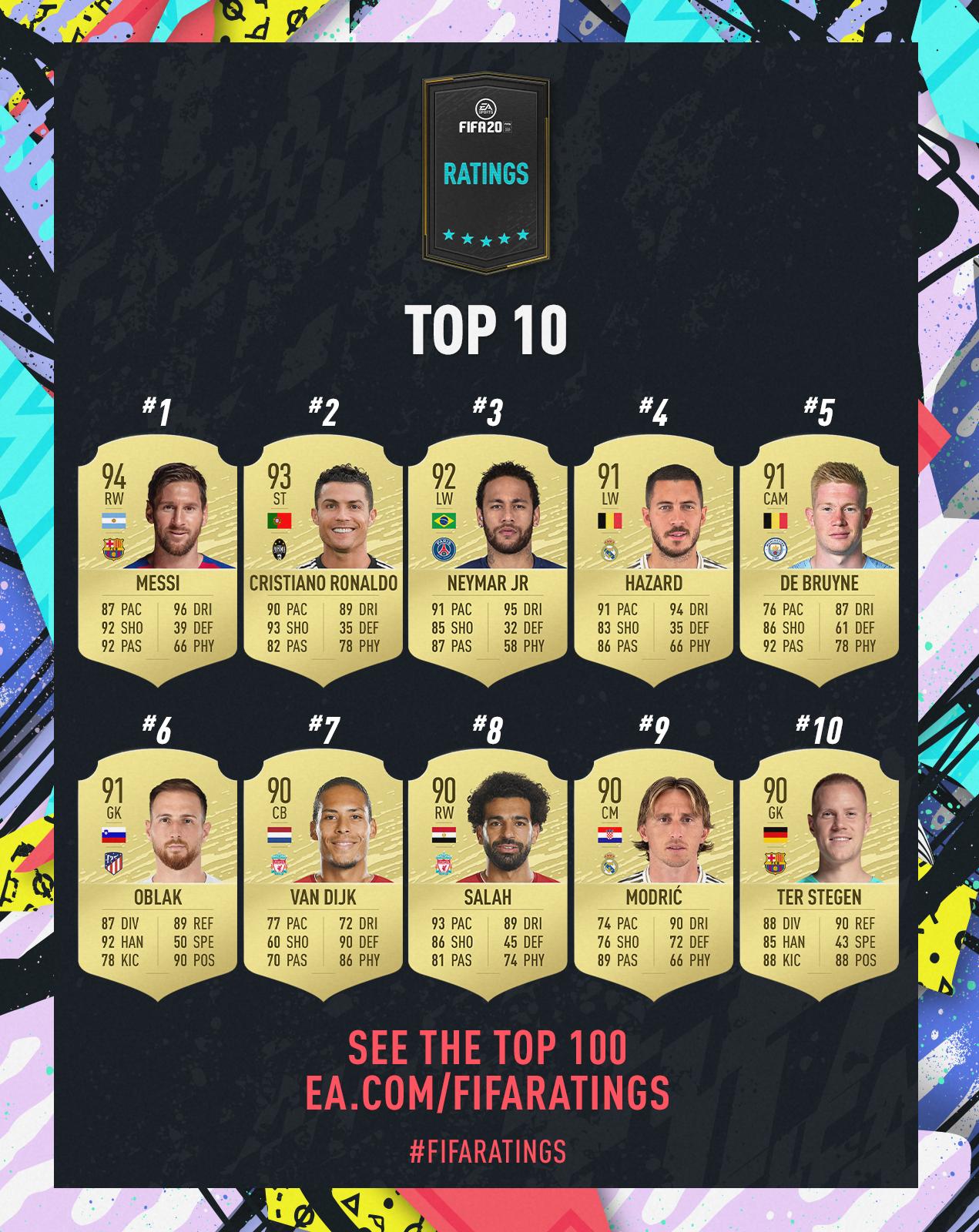 Finally released the list of the best players in FIFA 20 . In comparison to FIFA 19, we had some surprising changes, while other players remained stable and with the same high numbers. Despite the controversies, Neymar arrives with 92 of Overall , while CR7 stays with 93. Messi, as expected, is the best of the game, with 94. But to make it easier to see, we made a list of the 5 best by position . At the end of the article you can see the Dream Team of FIFA 20 !

De Gea is no longer the highlight under the goal posts. Now Oblak is the boss of FIFA 20 networks . Soon after, on the rise, is Ter Stegen. Alisson, Brazilian Champions League champion for Liverpool, comes in third. The list extends with Ederson, Courtois, Lloris, Neuer and other good names in the position.

Close to Sergio Ramos was once again not the best defender in the game. In FIFA 20 it is fair that the post is given to Van Dijk, the Dutchman from Liverpool. But the Real Madrid Spaniard is close behind, followed by Chiellini. Who surprises here is Koulibaly, from Napoli. Godín takes the fifth position, followed by Piqué and Hummels.

Marcelo fell a lot in FIFA 20 , losing his reign to rival Jordi Alba. Overall, Overall the side in this issue declined significantly. Proof of this is that Kimmich, second best, is only 86. He is followed by Robertson, Carvajal and Alaba. Brazilians Alex Sandro and Marcelo are even below what they could be.

Kanté continues to reign as the best midfielder in the game. But in FIFA 20 Busquets comes close behind. Brazilians Casemiro and Fernandinho stand out as great Brazilians on this list. Verrati and Pjanic will complement the TOP 10, in addition to Raktic, Rodri and De Jong. Fabinho completes the group.

Anyone who wants quality socks will not be disappointed in FIFA 20 . De Bruyne and Modric remain at the top of the position. Right behind is Kroos, Eriksen and Pogba. A trio that also causes damage in any midfield.

Neymar Jr. surprises by the high number: 92. Many think that Ney would do ugly in FIFA 20 , but he is only behind Messi among the best tips. Then there are two more players: Hazard, now at Real, and Salah. Sterling, Dybala and Mané came in strong with 88 overall. Insigne, Sané and Coutinho close the list.

Cristiano Ronaldo is the owner of the center forward position. Kane, Suarez and Aguero are right behind. The young Mbappé is above the renowned Griezmann, Lewandowski and Aubameyang. Reus and Cavani complete the group!

If you do well in FIFA 20 you can have the team above in Ultimate Team. Ever wonder? But of course dozens of other players could make up other dream teams in this edition of Fifinha. Who else do you think you could have there? See the full list of all FIFA 20 Icon players ! Div Table styles are a great way to layout website sections on the page! Make sure you bookmark this useful free online HTML tool!