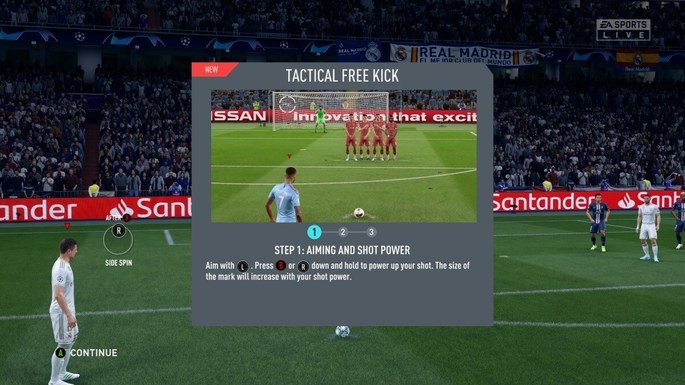 The FIFA 20 completely changed the way we charge penalty and faults in the game. And it is unanimous among players that this new system is much more complicated. Few are managing to score goals from dead balls. Either the ball goes out or goes towards the goalkeeper. So in this article we will teach you how to hit fouls and penalties in this new format!

How to hit penalties successfully

The scheme is simple after you train hard. But even those who are now getting used to this model will be able to first understand what needs to be done by reading the tutorial below:

Step 1: Place the visual marker wherever the ball goes

Use the left stick to place the marker or visual sight at the exact point where the ball wants to go. Note that this marker will try to return the center of the goal, so you will need to apply force to keep it in the desired position. This force will be applied until you kick. If you squeeze too hard, the target area will increase, meaning that accuracy has decreased. Try to find a balance here.

This is where the bug gets. There is a minigame that will determine whether and penalty will be accurate. It is enough that the kick is confirmed at the exact moment the marker passes through the green zone. If it fails, the ball will be sent away from the goal. If you see that the goalkeeper goes to the corner where you sent the ball, you can press L1 on PS4 or LB on Xbox One to give the controversial hollow. There are chances of this going wrong, but in some cases the goalkeeper does not recover in time to catch the ball.

How to hit fault perfectly

The foul collection model is similar to the penalty shootout, but it is more intuitive than technical. Anyway let's see how it works:

Step 1: aim the ball and calibrate the kick force

With the left analog you will establish the target of the collection. So far it is identical to penalties. Establish the strength of the kick by pressing the corresponding button. Again try to maintain medium strength, to prevent the ball from getting lost outside the stadium.

Step 2: determine the effect of the ball

In this step we will try to deceive the opposing goalkeeper. With the right analog stick we will determine the curve the ball will make towards the goal. If you turn the knob to the left, it will curve to that side. But be careful: this should only be done when the free kick taker is close to delivering the kick. This is essential to make the curve go as you want. Despite the difficulty of the movement, now in FIFA 20 charges with curves in the Roberto Carlos style are more common.

The free kicks also have a minigame. It is exactly the same with penalties: when the marker is in the green zone, press the kick button. Practice this a lot before going to the online matches , since mastering the dead balls is a differential in this edition. Also learn how to make all the FIFA 20 celebrations