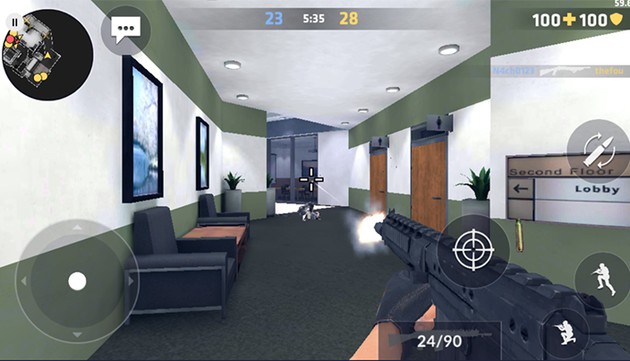 Critical Ops is a highly competitive shooting game, with a well thought out arsenal of weapons. So it is important to know which weapons match your style of play to get points or move up the ranks. In casual mode, the player is free to choose the weapons he likes best. But in ranked mode, you need to buy the right weapons, as there is a money limit. We score weapons using a numerical scale from 1 to 10. Check out our list and find out all about Critical Ops weapons.

Weapons equipped with optics, which cause a lot of damage, but with little magazine capacity and limited rate of fire. In Critical Ops, there are few maps with a good line of fire to use a sniper rifle, but they are a favorite of many players thanks to the high damage they cause.

Weapon that does a lot of damage, but has a bolt, forcing the player to take their eyes off the target while reloading each shot. For the price it pays off, but it is not easy to master. Grade: 7

Semi-automatic sniper, compensates for the little damage (for sniper) with the rate of fire. Two shots to the torso are enough to get an elimination. It is a great weapon to defend locations, but it is more expensive than the TRG 22. Grade: 8

The weapon that does the most damage in Critical Ops. One shot in the torso, even with kevlar, is enough to eliminate a player. If it hits an enemy in the arm or leg, it only has 5 HP. The rate of fire is slow and an expensive weapon, but in the right hands, it is a real phenomenon. Grade 10

Typical combat weapons at various distances due to their versatility. They are used by almost all players at some point during the game. They mostly cause medium damage, but make up for the rate of fire.

The cheapest Critical Ops rifle fires a practical burst of 5 shots. Despite the volume of bullets, it is necessary to hit the right places, otherwise you will not be able to cause that much damage. The recoil is manageable. Grade: 7

A good weapon for beginners thanks to the high rate of fire and little recoil. Unfortunately, it doesn't do much damage. It's cheap and works well for disciplined players who group shots well. Grade: 6

A classic of shooting games could not be missing. Causes a lot of damage, has a great rate of fire and a huge recoil. AK is a fierce animal and difficult to tame, but it is one of the most effective weapons in Critical Ops. Grade: 9

Despite being a rifle with a small magazine and low cadence, the HK417 is a good weapon for experienced players. Deals a lot of damage and gets good shots over long distances, but doesn't respond well to melee. Grade: 8

Basically, it is an M4 with silencer. That is, great rate of fire, but little damage. However, the silencer can make a difference if you can outflank enemies. Grade: 6 SG-553 Critical Ops' most expensive rifle is well worth the investment. The rate of fire and damage are brutal, but the recoil is difficult to tame. Keep your bursts short and you'll get better results. Grade: 8

Short weapons with very high rate of fire, perfect for short and medium distances. They do not cause great damage by bullet, but the large amount of lead compensates for this failure.

It is a classic weapon, recognized by any CS player, but in this game it is downright poor. It does little damage and, unless you get heashots often, there are other better options. It is cheap, however. Grade: 4

The extremely high rate of fire makes the MP7 a real terror in the right hands. It is a weapon for fast players, who like melee, but it is easy to exhaust all the bullets quickly. Keep your trigger finger disciplined. Grade: 6 P90 The famous futuristic-shaped weapon is a nice addition to your arsenal. It is an expensive weapon, but it has a large magazine of 50 ammunition and a good rate of fire (just slightly below the MP7). Think carefully before buying one, as the price may limit your equipment. Grade: 7

Weapons for short distances for aggressive players. They have a relatively slow rate of fire, but the damage they do makes up for it. Don't try to get into gunfights over long distances with shotguns in Critical Ops. Save them for those special moments in tight spaces. FP6 Critical Ops' cheapest main weapon is powerful, but like all shotguns, it’s a good idea to hit the nail on the head. Manual reloading is slow and can cost a waste ... yours. However, in places with little space, everything in front becomes mincemeat. Grade: 5

The best quality of this shotgun is to be automatic. That is, by keeping the trigger pressed, the player can detonate everything with powerful shots until he needs to reload. Unfortunately, it is quite expensive and, despite getting a lot of damage, it remains useless over great distances. Grade: 7

Secondary weapons, mostly used when the primary weapon runs out of ammunition or there is no time to reload. Unlike other games, everyone starts with a pistol and little else in ranked mode, so it is essential to learn to master this type of weaponry.

It is the standard Critical Ops pistol. It's free and who doesn't like free stuff? Enjoy and grab a Kevlar vest or a grenade with the money you saved. The P250 takes a long time to kill, but if you train hard it is an effective weapon. Grade: 5

A cheap pistol that doesn't do much damage, but is silenced. You can eliminate enemies without Kevlar with one shot. It is not worth the investment unless you like how it looks. Note 4:

Critical Ops' only revolver is a powerful weapon, capable of eliminating an enemy with a helmet and Kevlar with two well-placed shots. It is a good pistol, but it needs experience to master. Like all revolvers, it is slow and has only 6 bullets per barrel. Grade: 6

A balanced pistol with a good rate of fire and does some damage, but nothing big. The important thing is to be able to hit all the shots. It goes very well with a flashbang and you can decide the first round. Grade: 6 Dual MTX What's better than an MTX pistol? Two MTX pistols. These two fearsome pistols are expensive, but they make up for it with a good rate of fire, good damage and large magazines. Apply the shots well and don't give your enemies a chance. Good for aggressive players. Grade: 7 Now that you know the weapons, learn some tips to start doing well in Critical Ops . The online JS compressor tool will help you to optimize your scripts for a faster page loading.