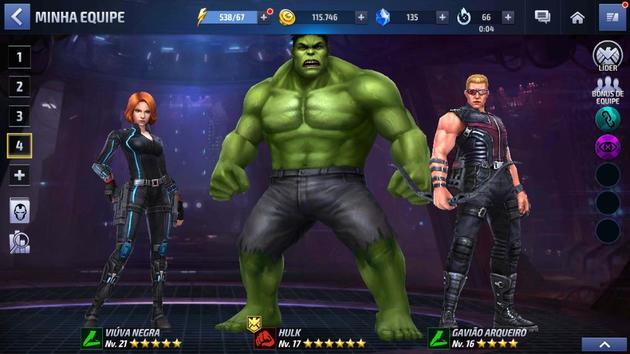 Creating a good team is essential to doing well in Marvel Future Fight! With this guide, we present the best teams with the best heroes, the best villains and the best bonuses resulting from these unions. There are teams that seem very obvious because of the relationship between the characters, but other teams are a surprise. Check out!

Advantages: a team with three of the four founders of the Avengers includes very interesting bonuses. Total attack and total defense increase by more than 5.5% (thanks to Captain America and Thor). With Iron Man and Captain America on the same team, the chances of recovering from stunning attacks, as well as the chances of making critical attacks, go up by 4.9%.

Beauty and the Beast

Advantages: Hulk and Black Widow have an interesting relationship in Avengers: The Age of Ultron. Gavião Arqueiro and Viúva Negra are longtime friends. With this trio, the total defense goes up to 5.2%, the maximum HP of the team goes up more than 5% and the chance of making critical attacks goes up 4.9%. Another important advantage: the recovery time for the characters to be able to reuse their special abilities drops by 4.7%.

Advantages: Captain America and Iron Man's helpers should not be underestimated. With these three characters, total defense, total attack and maximum HP go up by 4.9%. As the Universal Soldier and the Falcon have a rivalry, the chances of causing critical damage increase by 4.8% and the attack speed rises to impressive values (4.9%).

Advantages: the leader of the Avengers, the best fighter of SHIELD and the daughter of the two who came from the future make a good team. The bonuses with Shanon Rogers (Captain America) as leader are good, generating an energy shield for more than 5 seconds. With the other two elements of the team, total attack and total defense rise to an impressive 5.2%.

Advantages: the rivalry between the Winter Soldier and the Falcon, as well as the friendship between Captain America and the Winter Soldier, brings multiple bonuses to the team. The total attack goes up (5.5%), the total defense goes up (4.8%) and the Maximum HP goes up too (4.4%). Critical damage and the chance to cause critical damage are up 4.9%. And the attack speed also rises to an impressive 4.9%.