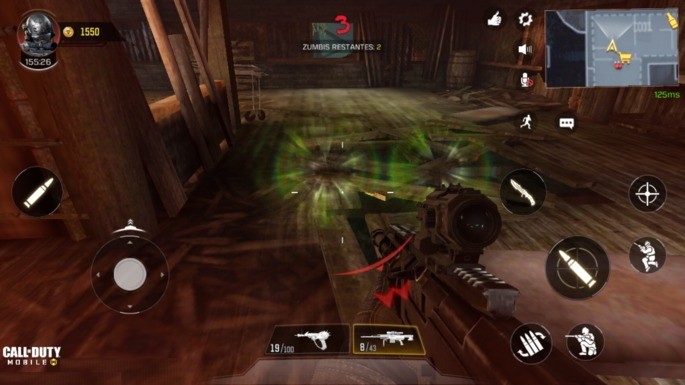 The long-awaited Zombie Mode was finally released on Call of Duty Mobile and brought an even more frantic level of action to the game. Full of its own rules and new mechanics, the mode is full of news for those who haven't tried it in other games in the series. So you don't waste any time and start bloodshed right away, check out 5 essential tips to get you started with Zombie Mode in Call of Duty Mobile!

1. Know the general rules of the mode

Call of Duty Mobile's Zombie Mode puts you on the well-known Shi no Numa map, and your goal is to survive several hordes of zombies. Before departure, you will need to choose between the three existing modes: All of the above modalities provide rewards according to your performance. The longer you survive, the greater the reward. Naturally, the rewards of Extreme Raid are better. Zombie Mode can be played individually or in squad. In the latter case, you need to check the “Fill Squad” box to find random players, or select “Invite Friends” to form a team with your acquaintances.

2. Customize your Armament before departure

In Zombie Mode, you will always start games with just a pistol and a knife. All other weapons must be purchased during the match. They will be stuck on the wall, where you can see the name and price. Likewise, to reload your ammo, you must purchase the same weapon again. Many players think that the weapons available for purchase are defined by the game, but not! They are defined by their Armament (loadout). Thus, it is important that you customize your settings before departure so that you can buy your favorite weapons in the middle of the game.

Zombie Mode has a points system that functions as the mode's currency. Everything you do provides or costs points. Killing zombies, surviving hordes, hitting headshots, fixing windows and killing zombies with the knife are some examples of actions that provide points. These points are used to enable several options that help you throughout the game. With them you can: Managing your score well is an important factor for you to do well in Zombie Mode. Be aware!

You can buy several buffs during your games in Zombie Mode. In all, there are 4 types: Advantages, Skills, Bonuses and Power-ups. Learn more about each of them:

How to Buy Advantages

The Advantages of Zombie Mode are the same as those available in other modes of the game. The big difference here is that you can have up to 7 of them active at the same time. You can purchase them for various prices through the so-called Vantage-Cola Machines , marked on the minimap as soda bottles.

How to Buy Skills

Abilities are exclusive buffs for Zombie Mode. They are acquired through Coin Distributors for the initial price of 500 points. This value increases exponentially whenever you start the machine more times during the same round of zombies, but is reset when another round starts. The Skills are: You can only have one active skill at a time.

How to buy bonuses

Bonuses are the most interesting buffs in Zombie Mode. They are acquired through the Bonus Station for 200 points each. Bonuses purchased can be upgraded on the same machine, but each upgrade costs twice as much as the last. In all, there are 6 bonuses available for purchase. Initially you can only have 3 equipped at the same time. To unlock the fourth slot, you must first level the other 3 up to level 5, which is the maximum. The bonuses are:

How to get Power-ups

Power-ups are random buffs that are dropped from zombies. You have no way of choosing which ones will be available, and each has its own rules. Among them are: x2 point multiplier, full ammo reload, automatic elimination of all zombies, very strong temporary weapons, etc. Obviously, never miss a power-up.

5. Using traps in the best way

You will notice that the Shi no Numa map has some traps that you can use to your advantage. When paying the activation cost, the trap will run for a certain time and then stop. To activate it again, you will need to wait for a recharge time and then pay again. Avoid spending points on traps in Raid modes and always give priority to Perks and Bonuses. In Survival mode, it is inevitable that you need to use traps several times to get out of difficult situations. In such cases, follow these tips: Click here for more Call of Duty Mobile tips and tutorials!