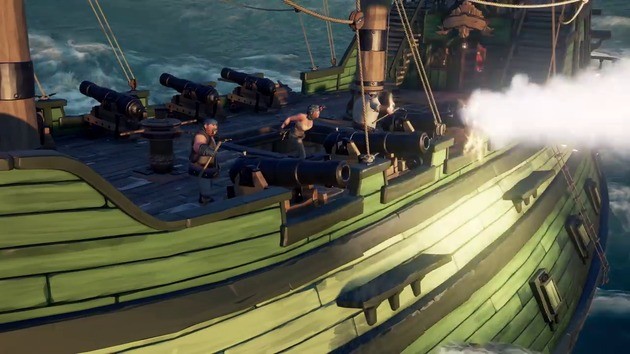 Being the most feared pirate in Sea of Thieves is no easy task. Fortunately, we have prepared a list of useful tips to help you in adventure, combat and exploration. Sea of Thieves was produced by Microsoft Games Studios for the Xbox One console and PC. It is a multiplayer adventure where you can direct ships, manage your crew and find treasures. The game's tutorial is very short and may not be enough for newbies, so we recommend that you pay attention to these tips:

Docked on an island and want to explore it with your crew? Go ahead! It is true that having all your crew on the island allows you to find treasures quickly, but what if the other pirates destroy your boat? Leave at least one crew member to take care of the boat. It can be boring, but you are not helpless. If you are with other players, understand each other by chat or by messages to choose the player who will watch the boat. It may be that in the next round, either you or one of your teammates will be on the lookout.

2. Hide the chest in hard to reach places

If you don't want rival pirates to steal your chest with treasures, it's not a good idea to hide it under the deck. Go up the mast and hide your chest in the crow's nest . That way, your enemies won't be able to grab the treasure or escape your boat quickly. There are other good places to hide a chest, such as the Captain's quarters. But if you really want to make it impossible to steal your precious chest, then put it on top of the candles.

3. Turn off all lights on the boat

If you want to attack an enemy boat by surprise or cross the ocean safely at night, the best strategy is to turn off all lanterns. Because at night it is very easy to detect the various yellow lights on the boats. If you also have treasures that glow in the dark, hide in the basement. With lights on, the boats you want to attack can see you and get away quickly. Use the darkness to get closer to rivals and attack to get their treasure.

4. Use the cannon to throw your pirate away

The cannon is not only used to shoot giant balls to destroy the enemy boat. Also use the cannon to hurl your character to a difficult place on the island or to land on the enemy boat. Remove the cannonball, adjust the sight, enter the cannon and shoot. Until your pirate lands on the ground, you can look around to see the whole island you want to explore and this is also the fastest means of transportation in the game.

5. Equip all cannons before combat

You never know when you're going to fight other pirate boats. You must always be prepared for combat. Go down to the basement, grab several balls from the red barrel, go up to the deck and arm all the cannons. Its cannons are essential to sink enemy ships (and some terrible sea monsters). Adjust the aim of your cannons to hit the hull of the enemy boat, making your rivals run into the hold in despair to plug the holes.

6. Count your steps to find the treasure

Finding chests buried on an island is one of the biggest challenges in Sea of Thieves. It is not enough to just use the map to find the island, it is also necessary to move to the place where the cross is. But to get to the exact location, you will really need a compass. Open your inventory, equip the compass, choose a direction and take a number of steps. Then, equip the shovel and use it to dig the chest.

7. Find the mermaid to return to the boat

What happens if you fall off your boat? First, you are left helpless to swim in shark-infested waters, and second, your boat is out of control. As soon as you fall into the water, follow the trail of smoke to find the mermaid that teleports you back to the boat. The mermaid can also help in situations where your boat is under attack and you don't want to lose your treasure. If you're near a port, jump into the water and swim to the spot. After delivering the chest, swim until you reach the mermaid to return to the boat.

The most feared creature of the seven seas! The Kraken is an octopus with giant tentacles that can catch pirates and sink a boat. No pirate ship in Sea of Thieves is safe because the Kraken can appear anywhere, anytime. Running away is your best tactic to survive. If you have no alternative, use cannons and pistols to hurt the tentacles. Fix the holes caused by the Kraken quickly, work as a team and maybe you can beat this terrible creature.