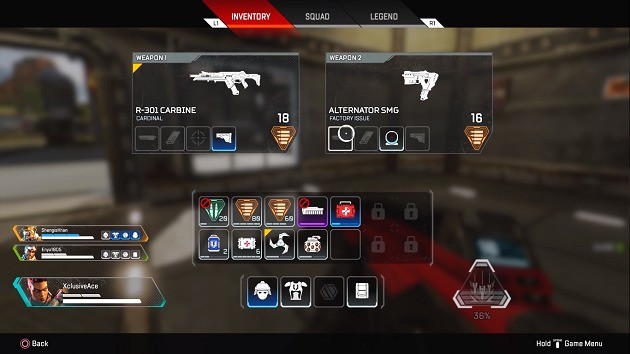 Need to increase your level in Apex Legends? Here we have collected some precious tips that make all the difference in high level matches. If you often watch the best Apex Legends players, you've certainly seen these tips being applied. Check below 8 advanced tips to improve your game in Apex Legends!

It is possible to keep your character running automatically. To do this, just open the inventory or the map while your Legend has been running at full speed. The tip is especially good for you to keep moving while you need to relocate items in the inventory.

Caustic traps are always a problem, especially in confined spaces or narrow corridors. For these moments you can disable them by shooting exactly at the red strip located at the base of the trap (as shown in the photo above). However, you need to be careful when using this tactic as a single shot off the red band will activate the trap. In addition, it is not possible to disable traps that are already activated, that is, if the gas is already coming out, a shot in the red ring will not solve the problem.

3. Learn the differences between the Lifeline Supply Capsule and the one on the map

Identifying whether a Supply Capsule is from the map or from any Lifeline is crucial in Apex Legends. Imagine running out to get equipment and discovering that an entire squad is positioned waiting for the capsule. To avoid this, while the capsule is in the air, pay attention to the following: If the capsule is already on the floor, note that the ones on the Lifeline have red outlines and the ones on the map have blue outlines.

4. Cancel the lag of your landing

Whenever you jump from a high place and touch the ground, it takes your character a short time to recover and be able to run again. To cancel this lag, simply perform a melee attack immediately before touching the ground. That way your character will recover automatically as soon as it lands.

5. Use the marking system on the equipment you need

Many players don't know but you can open the inventory and use the ping system on empty equipment slots. This will communicate to your team what items you need. The tool is especially useful for communicating what types of ammunition you need.

Whenever possible, try to start combats using grenades. You will hardly have the chance to use them during the exchange of fire. So, use them before exposing yourself by shooting to force opponents to reposition themselves, in addition to limiting the space in which they can move.

There are three types of melee strikes: punch (normal strike), kick (strike + jump) and uppercut (strike during slide). Although the three do the same amount of damage, the kick has the shortest animation and allows you to use it much more often. So whenever the situation calls for it, make sure to jump before hitting to do as much damage as possible.

This tip is not necessarily advanced, but many players do not know or still forget about this option. The doors in Apex Legends can be destroyed. This mechanic is very useful when an opponent is blocking the door on the other side to stay alive. At such times, two melee attacks will destroy the door and knock the opponent away, dealing some damage. Click here for more Apex Legends tips and tutorials!