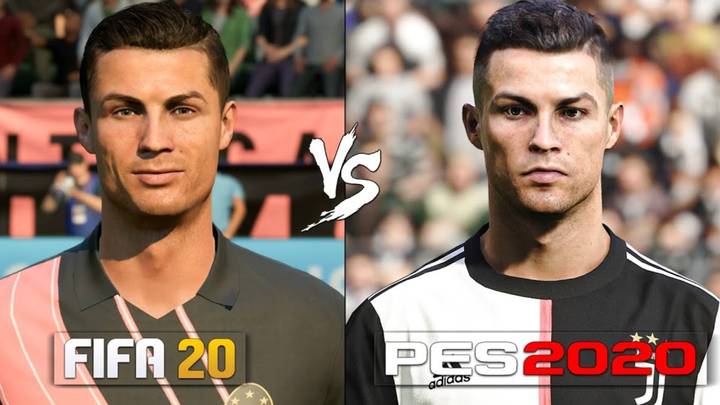 Every year the PES v. FIFA gets even worse. This year, both games promised several new features, such as new game modes, exclusive licenses and improvements in gameplay. But which one really reached the expectations of the players? Which will be the best in the PES 2020 vs. FIFA 20 ? It would be impossible to analyze the confrontation between the titles without making an individual analysis of each one. So let's first talk about the strengths and weaknesses of PES 2020 . Then we'll focus on FIFA 20 , ending with a verdict on which is the best this year.

PES 2020 : The best of the franchise so far in gameplay

The Konami title hit stores on September 10, 2019. The hype was very high, mainly because in the weeks before its launch the Japanese company announced several exclusive licenses. The fans were excited, and some FIFA players even announced that they would migrate to Pro Evolution Soccer . The demo was very well received, too. The expert critics seemed quite delighted with the game. We ourselves at Liga dos Games have shown great interest in PES 2020 . It seemed that FIFA would finally have a competitor to match. It will be?

PES 2020 incorporates the main feature of the franchise, which is to be a football simulator. This means that you will have a gameplay that is very faithful to what we would see in a real football match. Wrong passes, high kicks, fast paced play are some of the compliments we can give to the game. In fact, even names like Cristiano Ronaldo may have some difficulty receiving a very strong pass. The dominance of the round requires calm, as well as making tables. Fast counterattacks are also rare in the game, as the chances of you having the ball intercepted midway are huge! This does not mean that there are no imperfections. The defense system is still a problem. Defenders often retreat alone towards the goal itself, giving the opponent plenty of space. Besides, switching from one player to another is really a nightmare, especially in online matches . Already the graphics are a marvel. PES 2020 manages to be even more beautiful than its predecessor. The mood in the stadiums is very close to reality. The fans sing all the time, and playing with teams from the Brasileirão, like Flamengo or Palmeiras, is awesome.

Complete A and B series, but outdated?

Konami gave fans hope that Brazilian teams would be properly respected in PES 2020 . They were not. Even disclosing that all the teams from the first two series of the Brasileirão would be in the game, it was not the way we all expected. Many or almost all do not have weekly rosters, as with European clubs. According to Konami, this is due to the fact that it is not easy to negotiate rights with clubs and athletes in Brazil. Anyway, all Brazilian teams present in the game have their uniforms updated. PES 2020 also has some Brazilian stadiums, such as Allianz Park, Morumbi and Arena Corinthians. Even without all the real players, you can have a lot of fun with the brazukas casts. Especially if you use an Option File on PS4 and PC. Unfortunately generic players and lack of licenses is a general and old problem of PES . In the 2020 edition this unfortunately persists in virtually every league in Europe. Only a few major Europeans fully licensed, but it's annoying to see that the opponents didn't receive the same care.

Master League renewed and quite satisfactory

The PES 2020 Master League is very real about managing a football team. In narrative terms, it's even better than FIFA 20's Career Mode . Mainly because you can take charge of personalities like Maradona and Johan Cruyff You have interactive dialogue options, which interferes with the way players, club directors and fans see you. A really cool point is being able to hear what your team members have to say about you and the team itself. With a renewed hiring system, decide whether you want to make changes in the squad or trust your athletes. STRENGTHS: NEGATIVE POINTS:

Every year FIFA titles arrive with suspicion. EA has been accused for some editions of always launching the same game, but with timely updates. This could be done from much cheaper or even free annual DLCs. With FIFA 20 , however, promises that were really interesting and real were promised. The main one was VOLTA Football. For many, it was the return of FIFA Street , a free-style dribbling street soccer game . This revamped FIFA Street would still come with Futsal, with a story mode, player creation and other good features . In addition, other updates stood out. Among them, additions to Career Mode, new Icons players and gameplay changes. It looked like we were finally going to have a completely new game in the franchise, without looking like just an annual update.

The main complaint of the fans PES in relation to FIFA 's about the gameplay. After all, Pro Evolution Soccer has always presented a more paced gameplay , in order to simulate real football matches. FIFA , on the other hand, and at 20 this continues, it is still very arcade . In other words: touch the ball here, pass it there, kick on goal and that's it. It is as if there is a perfect formula to pass through the midfield and reach the marker successfully. However, there were occasional improvements in this regard. Kicking from a distance and doing dribbling is more difficult, and the defensive system in general is more intelligent. It is no longer that simple to get from one end of the lawn to the other without losing the ball. The new system of dead balls, such as fouls and penalties, contributes to having a more real game. In the first 10 or 20 matches you will hate it. It is really difficult to master the aim, hit with force and not send the ball away or in the goalkeeper. After a lot of training, however, one feels that this has indeed been quite an improvement.

Career mode with a new face and problems

FIFA 20 Career Mode has received special attention from EA. Now the customization options for those who play as Manager are much larger. For the first time you can be a woman, for example, which makes the game take a timid step towards representation. The interview system, the new hiring format and the cinematic touch given to the negotiations make the mode visually very beautiful. You really feel like a football coach with all the difficulties and facilities of the profession. The whole point is that, in the end, Career Mode hasn't changed at all. Despite the aesthetic aspects, it is the same thing, but with problems. In the first week of the game's release, EA received a slew of complaints from players regarding the fact that the AI ??of the opposing clubs is bad. In other words: the teams put their worst players on the field, with unexpected results that hinder the overall experience. According to EA, the idea was to have more realism, to make competitions more difficult. In the end, they got easier, and it seems that nobody liked it very much.

The FUT has received some substantial changes. The main one was the inclusion of Seasons in order to look like Fortnite . That is: you need to perform specific tasks if you want to get points. This kind of encourages players to play, because over almost 2 months you can try to be the best to win prizes. Playing Friendlies with your friends is also a lot of fun. Mainly because there is no ranking. You can still create crazy and funny rules that make games more dynamic. Even not having absences or cards, which can turn into that Sunday game on the street with the neighbors. In the end, however, the Ultimate Team remains a slot machine. It is better to spend more on packages and coins . Unfortunately the competitiveness of FUT exists much more among the players who have more money to assemble a perfect team. Even so, for those who like it, the new menus, the new submodes and the super fast matchmaking system make this the most complete and fun mode in FIFA 20 .

LAP mode did not convince

What appeared to be the flagship of FIFA 20 was not convincing: VOLTA Football Mode was a largely failed attempt to bring FIFA Street back. Did not work. In the demo we noticed that the gameplay was strange, outdated and very limited. Dribbling sounds fake, unreal, and even the History mode within VOLTA didn't make it any easier to swallow. In fact, meaningless and uninteresting dialogues undermine something that is no longer very good. Otherwise the match system was punitive. If in a 5-game tournament you lose the fourth, you have to start all over again. Many players have given up playing history for this. Although VOLTA is nostalgic and brings back the experience of FIFA 97 with its indoor soccer, it is lacking. Controls are tough, players are generic and in the end it's just a shadow of what FIFA Street represented in 2012. STRENGTHS: NEGATIVE POINTS:

FIFA is still better than PES

The relationship between the two biggest virtual football titles has not always been bad. For a long time Pro Evolution Soccer and FIFA coexisted in harmony. It was from the PlayStation 3 that the relationship went sour. Since then, FIFA has been at the forefront. EA has taken its foot off the accelerator since FIFA 2017 , but in the 20th it accelerated a little more. Even with the partial disappointment that the VOLTA mode was. Even with the problems in Career Mode. Even with Juventus calling themselves Piemonte Calcio. The fact is that FIFA 20 is still a Lamborghini. Modified here and there, with some occasional improvements, but with a level of quality that we cannot complain about.

The PES 2020 is a beautiful, sleek, well-engineered BMW that is made for city-only riding. An accommodated car, like Konami herself, that in no way can compete with FIFA 20 . It is a pity that PES 2020 has regressed in relation to its demo. Gameplay worsened in the final version, which is inconsistent. The lack of licenses remains the franchise's biggest weakness. The fact that it is much less arcade also bothers a wide range of players. In addition, the absence of a way in which Ultimate Team brings PES down on the canvas. Even though it is a slot machine, the level of competitiveness of this type of game mode is very high. Something that doesn't exist in Pro Evolution Soccer . The absence of a more robust online experience makes Konami's life very difficult. In the end, PES 2020 has evolved from the past, but not enough. FIFA 20 , in turn, remained in the same place, as was already expected by the players. For maintaining the high level it has always been, we consider that EA's game came out ahead this year. And again because Konami did not know how to face it.