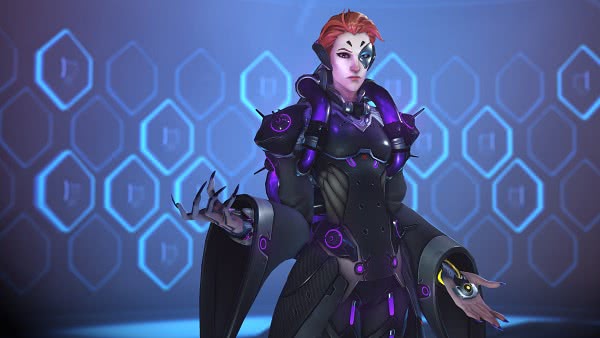 Moira is the fifth character to be included in the list of Overwatch heroes and is a versatile healer. She can combine her abilities to both heal and deal damage. Check out this guide to learn how to take advantage of your possibilities!

Scientist Moira O'Deorain made enemies by publishing a study detailing a methodology for creating personalized genetic programs. She was accused by them of having a desire for unscrupulous scientific advancement. Now, with her career destroyed, Moira ended up accepting an investment from Overwatch's secret team, Blackwatch . And, together with them, she managed to continue her work while developing secret weapons and technologies for the organization. However, after Overwatch's disintegration, Moira was forced to seek another form of funding and agreed to work for the terrorist organization Talon .

Moira is a very balanced character who can be very strong against tanks, due to her ability to overcome shields and barriers with her abilities. Being a support hero, Moira's main function is to heal. However, her abilities are based on a duality that makes her need to deal damage to be able to heal effectively. You therefore need to learn how to fix your skills. While healing, a visual indicator will indicate how much energy you still have available. When that energy runs out, you can no longer heal. It is then necessary for you to use your damage skills to regenerate your healings more quickly .

Moira's most effective ability is her Biotic Orb, with which you can deal damage or heal. Shoot the globe in the middle of a group of enemies to be able to deal substantial damage and thus restore your life and energy at the same time. Your most important function during the game, in addition to keeping your allies alive, is to be able to pierce the shields and barriers of enemy tanks with your skills. By doing this, you will be able to damage the tanks themselves and also the other players who are protecting themselves behind their shields. On the other hand, always pay attention to heroes like Pharah, Ana, Hanzo and Widowmaker, as they will try to catch Moira from distances beyond the limits of their abilities.

Moira's primary ability has two modes: attack and healing . When in attack, Moira fires a beam of dark energy that steals the life of her opponents, thus regenerating her life and her biotic energy. This mode does not need ammunition, so you can chase your enemies without stopping. When you use Biotic Fist to heal, a healing mist will be cast on multiple allies at the same time. But when using this mode, you will spend biotic energy. So it is essential that you balance your attacks and your cures to make sure that Moira always has energy available to heal. Since the attack distance is moderate, you can stay with your team members to attack when you need to regenerate your energy.

This orb can damage enemies as well as heal allies, depending on the type you choose when selecting the ability. The Biotic Orb has a very large advantage over other attacks. He manages to pass through shields and barriers of enemy tanks and, thus, reach opponents who are protected on the other side. Use your orbs especially in confined spaces to increase the amount of healing or damage per second.

Fading allows Moira to teleport over short distances, gaining momentary invulnerability and invisibility . This means that it can move strategically across the battlefield, choosing weak targets to pick up and evading attacks launched by opponents. The main objectives of Fading are to evade attacks, escape difficult battles, avoid major attacks by other players, and turn back if you are falling into an abyss.

This ability is very useful during big battles between teams, as it allows Moira to heal and attack at the same time. When activated, Coalescence casts a lightning bolt at a great distance, capable of overcoming shields and barriers while damaging enemies and healing its allies simultaneously. This skill is very useful in helping your team to pierce enemy defenses and you can use it to destroy Towers and Bastions that are protected behind tank shields. You can also combine this ability intelligently with your allies . Use it with Genji or Reaper, during Dragon Blade or Blossoming of Death, respectively, to keep them alive while they eliminate various enemies with these abilities.