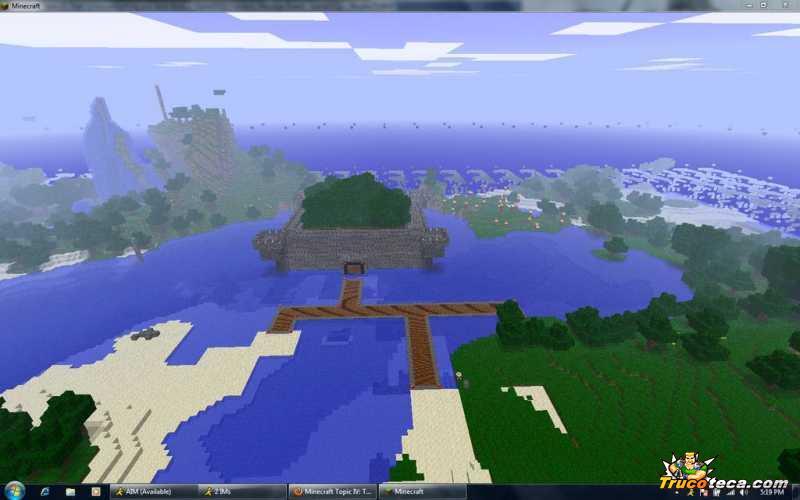 The PS4 version is one of the most played Minecraft. Every day tens of thousands of players have a great time trying to survive and collecting precious material . With the following tricks and tips you will not have problems or difficulties to apply them and you will be able to benefit greatly from the advantages they will provide you.

Upgrade Minecraft from PS3 to PS4:

If you have previously purchased the PS3 edition (on disk or digital) you can upgrade Minecraft to the PS4 in exchange for a small fee (€ 3.99). Simply enter the PS Store and search for Minecraft PS4 Edition, you will get the amount reduced if you have the digital or physical game on PS3. Those who join the Minecraft experience via disk will find a voucher with a code to redeem.

Transfer games from PS3 to PS4:

Once the transfer of data from one console to another, it will be irreversible, you can only have the games in a console.

You must have two buckets full of water that comes from a natural resource in the area (a lake, for example). Dig a 2 × 2 plot (that is, four blocks) and empty the water buckets in opposite corners, creating an infinite amount of water.

The first trick is a glitch that has not yet been corrected in the PS4 version. To take advantage of it, the first thing you have to do is crawl a ladder. Then place it on a wall, preferably in any cave you find. Place your character behind the structure, at a distance of approximately two or three blocks. Just then you must activate the rear view in third person. With the help of the right joystick, position the character's vision so that it remains touching the ladder you have shaped. You may need to repeat the process if you have never done it before. However, the one you hit with the key will not cost you to do it again and enjoy the result: both the staircase and the wall on which you have placed it will be transparent as if your character had X-ray vision. What is the usefulness of this trick? Basically the ease of exploration. There are many caves of Minecraft for PS4 that house diamonds and many treasures in general. Taking advantage of the glitch you will know exactly where they are located without needing to access each cave with which you give.

Undeniably obsidian is one of the most precious types of Minecraft blocks. Did you know that there is a trick to get it unlimitedly? Keep in mind that to do this you need the collaboration of another player. First access the Survival Mode and create a Portal to the Lower World. Invite someone to the game session and destroy a block present in the outside world - that is, outside the portal. He then returns through it to the Lower World, which will lead to the appearance of another portal. You will generate as many portals as occasions when you carry out the aforementioned procedure. But what does this have to do with obsidian? Basically, such material is obtained, among other ways, by breaking portals. If they are unlimited, you can get as many black and violet blocks as you want.

Build a large house with virtually no material waste

Every player likes to own a large house in Minecraft. The truth is that this requires spending a huge amount of material, although if you put into practice the following method you will only have to invest the amount of wood needed to make a door. And the process is simply summarized in taking advantage of the structure of a cave. Because it will become your home, it is important that you invest the time needed to find the one that best suits you: location, size, types of creatures present in the surroundings, and so on. After finding your ideal cave, build a tunnel and seal it with the door, which only needs six wooden units. You will be safe and no enemy will besiege you inside. Now it only remains to convert the initial hall into a very spacious house. For this purpose make use of the peak and expand the interior structure as much as you deem appropriate. Due to its simplicity it is an ideal method for beginners who want to have a moderately cozy home but do not have too much crafted material.

Automated cultivation of melons and pumpkins

In this Video I show you a Tutorial about how to build an automated Melon or Pumpkin Cultivation (Melons or Pumpkins). With infinite uses without maintenance. (This only works for Version 1.1 of Minecraft onwards, previous versions require re-plowing the land). (Trick provided by the ultragamer user).

Treasure hidden in the Tutorial

While you play in Tutorial mode in Minecraft, you acquire enough blocks to make a ladder that allows you to reach the Minecraft sign in the sky. Investigate the area between the clouds until you find a chest. Inside this there are some diamond armor.

If you carry and put water in the Nether, it will obviously evaporate. You can then enter Creative Mode to release that limitation (but you will not be able to unlock achievements). Once you enter Creative Mode, enter the Nether and place a bucket of water on the bar. Now you can wait for the block to melt until it becomes water. This action will take a few minutes that you can accelerate by placing torches or incandescent stones.

Start playing under Tutorial mode with the game set to peaceful. Collect enough land to build a ladder that reaches the Minecraft world that is floating in the sky. You will find a lever that, when moved, opens a portal to Nether.

If the water or other liquid is flooding the base of the hollow of an elevator you would have built, an exit sign can be placed just outside the bottom of the elevator. While the elevator is properly closed, the sign will prevent liquid (water or lava) from filling the elevator base area.

Break into the void

First, create a rock hole with a peak. Then, place TNT on top of the Bedrock, all the way to layer 127. Blow up the TNT to get a hole in the void. Try the free CSS tidy lets you easily beautify stylesheets for your websites.