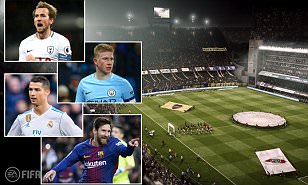 FIFA 18 has a lot of very strong teams that we see giving a Champions League ball show with the best players in the world. In the middle of the European elite, you have to know which teams are best to win without giving your friends a chance. These 10 teams are all very strong, but it is important to know the characteristics of each one to adapt to your way of playing. Once you see this list, there's no excuse that "your team is stronger than mine".

Chelsea are always candidates to win the Premier League and have a very strong cast. Midfielder is the strongest sector with players like Cesc Fàbregas (85) and N'Golo Kanté (88). There is also a lot of creativity in attacking star Eden Hazard (91) and Brazilian international Willian (84). If you like solid teams that play in organized attack, Chelsea is a good option. However, defense is slow, which can cause some difficulties against counterattacking teams.

Coach Diego Simeone's team is well organized and very difficult to beat. It is always very complicated for the opposing teams to score at Atletico Madrid. And with Griezman (88) in attack, it doesn't take many chances for Atletico Madrid to score. For those who like patient teams looking for the distractions of opponents to score, Atletico Madrid is the ideal team. Midfield is slow, but players have a lot of technique to compensate for.

Manchester United are a team that has invested heavily in recent years and has a number of world-class stars. Portuguese coach José Mourinho's team has one of the best goalkeepers in the world De Gea (91), super midfielder Pogba (88) and powerful striker Lukaku (86). Manchester United's attack is strong and very fast with players like Rashford (81) and Martial (83). If you like to attack very fast, this team has what it takes to win.

The Spurs (Tottenham) are a young team with huge potential. The attack is very well delivered to midfielder Eriksen (88), South Korean Son (84), young promise Dele Alli (84) and striker striker Harry Kane (88). However, the defense is the weakness of the Spurs. If you face very fast teams, you will experience some difficulties in defense. This team has a lot of potential and if you explore the attack well you can score a lot of goals.

A team with Neymar (92), Dani Alves (83), Thiago Silva (87) and Marquinhos (84) is almost half of the Brazilian team. The options for the attack are various with golden boy Mbappé (84), Uruguayan striker Cavani (88), Argentinian forward Di Maria (84) and of course our Neymar (92). You have everything to go well with Paris SG's attack, but the ball needs to reach the attackers and that's the problem. The midfield is not very good, except for Italian Verratti (87).

Coach Guardiola's squad is clearly one of the strongest in FIFA 18. The midfield run by Kevin De Bruyne (91) and David Silva (89) is probably the deadliest of them all. Already in the attack, there is the super fast trio, composed by Sané (85), Sterling (85) and Aguero (89) - capable of destroying any defense.
The 2017/2018 Premier League champions are a team with enormous offensive power. In defense, defender duo Kompany (85) and Otamendi (85) are very efficient.

Juventus are the only Italian team on this list, but it is a real win machine. Defeated Champions League finalists 2017 are deadly in attack with Argentine duo Paulo Dybala (89) and scorer Gonzalo Higuaín (90). Leaders Juan Cudrado (83) and Brazilian Douglas Costa (84) are fast and perfect for playing with the attacking duo. Midfield and defense are very solid sectors, although not fast.

It is customary for Barcelona to be FIFA's deadliest attack and this year is no exception. Lionel Messi (94), along with his attacking partners Suaréz (92) and Brazilian Coutinho (87), makes any defense in the world tremble.
The defense is not perfect, but it does its job very well where defender Pique (87) is the main protagonist. Barcelona are full of stars and no one has difficulty playing with this team.

Real Madrid have won three Champions League games in a row and are almost a perfect team with a lot of experience. Cristiano Ronaldo (94) is the super star and is surrounded by other stars such as Luka Modric (89), Toni Kroos (90) and Gareth Bale (88). Sergio Ramos (90) is the team captain and probably the best defender in FIFA 18. Real Madrid are very fast on the counter attack and an excellent option for those who like to play fast. If Cristiano Ronaldo gets some space, it is certainly a big threat to his rivals.

The strongest team in FIFA 18 is the German FC Bayern Munich team. It is the most balanced team in all sectors and is made up of great players such as striker Lewandowski (91), James Rodriguez (87), Thomas Muller (86) and seasoned tips Robben (87) and Ribery (85).
In defense there is a lot of security with defender duo Hummels (90) and Jérôme Boateng (87) and defenders David Alaba (85) and Kimmich (84). Without forgetting the goalkeeper, the German giant Manuel Neuer (92). If you choose FC Bayern, you will not fear any FIFA 18 team! Now that you know the best teams, meet the top 10 players by position ! Check out the best Brazilian teams of FIFA 18!