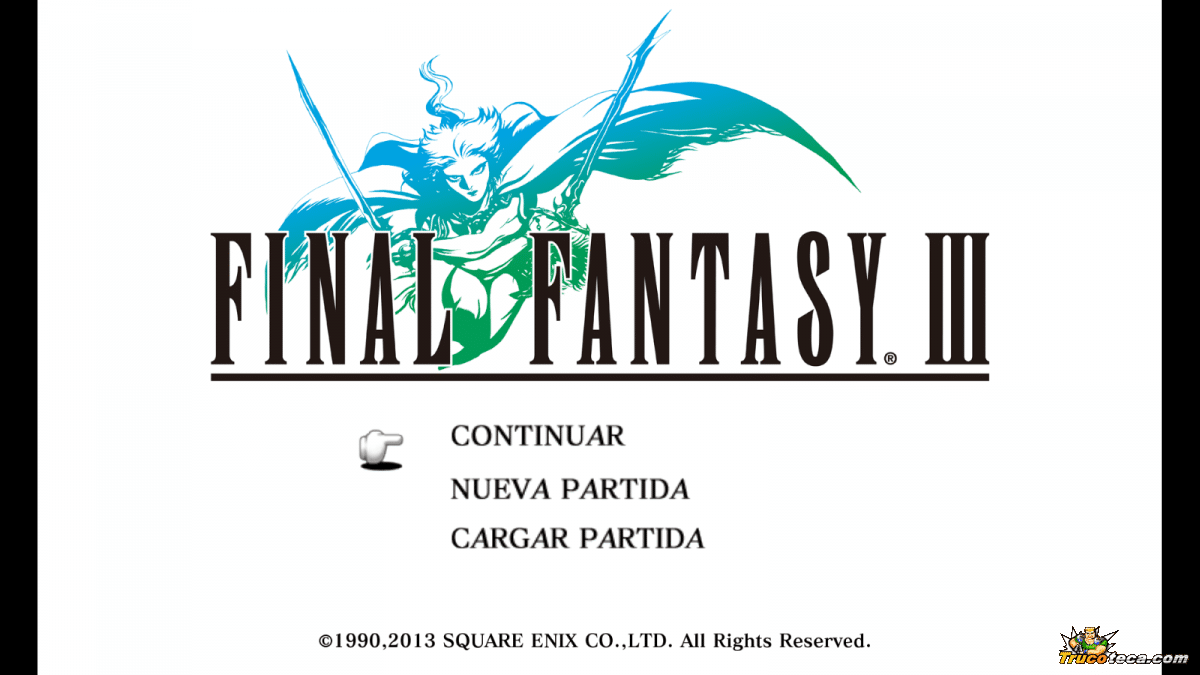 How to acquire the ninja class:

To get the strongest class of the title you need to go to the Eureka area ( in the Sylx tower ) and look for the last teleportation, then go left and you will see a magic bar float, touch it and you will fight Scvila to get the class.

How to get the secret dungeon:

Send seven emails to another PC using the MogNet , send 4 emails using the MogNet to the four elves, send four emails to King Arusu and read the room (you will get a gift), go to the underwater ship and the floating island to the south, you'll see A shadow in the water, enter the water and enter the cave. Be careful, this boss attacks four times per second usually with Meteo.

It jeopardizes the data stored in the cartridge. Use with discretion. Not verified 1. Open the menu during "walk mode" (that is, not in a battle). 2. Select any character magic and in it using the Select button. Keep in mind that this character, if he or she has existing magic, may have his spells overwritten if he continues through this fault. 3. Go trade select in the magic menu and highlight a character with the magic you want to duplicate, but not the A button. Instead, after highlighting the target character, press the B button to cancel the »trade» command. 4. Once in the first character you chose, select the «Delete» command and move the cursor to the level and space of the magic you wish to duplicate from the second character you had underlined before. You will get the error message, but it will remove the magic you don't have (duplicate magic).

It jeopardizes the data stored in the cartridge. Use with discretion. All usable items (not weapons / armor / magic) can be tricked using this method, as mentioned. 1. Open the menu during "walk mode" (that is, not in a battle). 2. Select “Items” and put the item you want duplicates in the upper left corner of the item list. 3. They engage in a random battle. During the battle, select the item command for any character. 4. The cursor should be in the upper right of the article box (and in the article you have placed there). Press up and at the same time. Briefly this should lead you to the weapon and shield lists. If you see this, the code has worked after you press the B button. Go to your inventory and you will notice that the quantity of the item has been added by one. You can do it for any item that is stackable.

1. Register a communication ID under Mog network and send emails to another PC 7 times. 2. 4 Send and receive emails from Topapa, and in the room, you will receive a message to make a mini-quest. 3. Go to the first city in the game and talk to Topapa. 4. Go to the designated northern cave. 5. In the dungeon, you will have an event and then fight 3 enemies 6. After the battle, you will get a piece of glass, which will be unlocked from class.

DS version has a secret dungeon that is accessed after performing the following. 1. Send a total of 7 e-mails to another PC (one at a time) or several at the same time using Mog Net. 2. Send emails 4 using Mog Net with the NPC «4 majors». 3. Send 4 emails to King Arusu. After reading the room email, you will release a search. 4. Go aboard the aircraft that can go underwater. 5. Go to the floating island and once it appears on the screen, travel south cardinally. 6. Finally you will see a shadow in the waters. Enter it to enter the underwater cave. 7. You will meet the secret boss. This boss is notorious and average. He has a total of four attacks per round and uses Meteo.

To get to the onion series of teams, which is among the strongest team in the game, do you have to ??? Dungeon (so named) where the iron giants, as well as the red dragon, are enemies of Green Dragon and the yellow dragon. Each of them will have a 72% chance of dropping an Elixir when killed. The other 28% is dedicated to dropping a specific piece of onion. Yellow dragons drop onion Helms, green dragons drop Onion gauntlets and red dragons drop onion armor. They all drop onion shields and onion swords.

To get the Shuriken (available only for the kind of Ninja that pulls), head to the city of Gysahl. Enter the ship where you can buy Magic Keys. Go to the right of the store counter and you will have to walk through a secret passageway that allows you to go behind the desk. There you will find the treasure chest containing the powerful Shuriken. In the forbidden land of Eureka, there is a shop that sells many products, among which is the powerful launch element called Shuriken. They sell a piece for 65,000 gold and are extremely powerful. To find this hidden shop, head to the treasure chest on the right in this area, where a hidden path can be found.

Here is a great way to level up near the end of the game if your party is in dire need of experience (or gold). Go to the labyrinth of the ancients, which is located outside the glass tower. Here, you will find an enemy called a greater demon. This creature attacks twice a turn and has about 10,000 horsepower. These creatures can also summon monsters called iron claws (doing this technique similar to that used in Final Fantasy IV near the summoner's village). If you kill the summoned enemies but not the summoner itself, they will continue to summon more enemies. This battle can theoretically last for hours (while the elder demon is not killed) and you can net a ridiculous amount of gold and experience.

There are six levels eight spells (Flare, Death, Meteorite, Tornado, Arise, Santo), but they can only be purchased for use in a store. The shop is located in the forbidden land of Eureka, and each spell can be purchased as many times as you would like for 60,000 Gil per spell.

If you want to be able to level a character at work level 99 in any given job in just a few hours, do the following. Enter a random battle with as weak enemy as you can find (since how strong the creature is is arbitrary). Select the "Protector" command of your characters. Do this for four rounds. In the fifth round, kill the enemy party. Each character will receive a work level. Repeat as necessary.

To kill the cloud of darkness you need a black belt, a scholar and a devotee. The third position is plotting, which I used a Geomance whitch seemed to work fine. For the devotee she will need the spells Curaga, Curaja, introduce herself and Esuna and that's all you need but if you have the rest that will help. Everyone must be at least level 60 but the higher the level of the easyer is the beet the boss. Everyone should have a tape for two reasons: one, it is because it helps with the magical defense and two, because the cloud of darkness has two tentacles that usually use "Bad breath" that will inflict every condition been at your party. The black belt must have the infernal claws and the dark claws. Use the duplication trick of either a Chocoboe spectrum or untile we have a white musk has about 25 for all bosses in the world of darkness and cloud. If the student uses one of those at a sufficiently high level work will always hurt 9,999. Use Curaga every time unless your party is not as healthy then use Curaja. Black belt attack every time. If you have to use Arise, everyone should use an elixir if they don't have complete health. If you are using the Geomancer as, I tried Terrian every turn. Within 5 to 7 laps, the battle will be erased.

1. Record someone's friend code (or more) in your DS. 2. Send 7 messages to another DS (far or near) 3. Send messages to Takka until you get an answer talking about Orichalum. 4. Fix Sara's pendant by sending messages until you get an answer saying that her pendant is broken. 5. Ask Takka to fix it. 6. If that doesn't work, meet the legendary smith. The floating continent going out and going to the northwest city of une. The legendary smith must be near the path that leads to the library. If you find the Orichalium (used to make an Artema weapon), she will forge something and give it in exchange for finding the Orichalum 7. Fix it and return to Sara. 8. Send messages to the Cid until it responds with a kind of title "Something is in the basement ..." 9. Go to Cid's house in Canaan and talk to Cid. Head to the basement on the east side of the room, kill Aeon and you should drop Unknown Metal. Talk to Cid and he will say that it is the legendary metal called, Orihalcum. 10. Don't go to join. Go to Falgbard (city with all dark knights). He should be by the river in the city, to go talk to her and take her Orichalum and transform into a weapon called the Artema weapon.

When you are able to get the monk jobs I Blackbelt take them out immediately in one of the two characters. Monk and Blackbelt do massive amounts of damage even without weapons. The monks are the first stage but they have earlier vitality and can do 9,999 as soon as lvl 30 in some cases or earlier versions. Black ribbons are of the monk's updated rank but can do much more damage. The monks can increase their attack so on the next round that can unleash a massive blow. Blackbelt also have high vitality and agility so they can attack first, long strike and hard hand.

In the previous parts of the game when they are alone and party-less, excessive regulation is highly recommended since the level at which your partners will be introduced will highly depend on the level you are in when you see them. For example, Fran and Balthier will always be 2 to 4 levels above you when you get to use them. If you are Lv10 then they can be anywhere from Lv12 to Lv14. This may seem unimportant, but it will soon become apparent at the highest levels when each level requires 30K exp and on top of that death experience points are divided to each of its party members. These little early foundations can become a godsent further in the game.

At first I had problems with the boss, but here is an easy way. Go through the dugeon a couple of times to get enough exp to further facilitate the battle. But a city for the south called "the town of the ancients" contains the three levels of black magics, as well as the white magic teleport. I have used three magicians: 2 red (Luneth and Ingus) and black (Arc). I made Refia a monk. They have their cast of healing red magicians and ice spells. A monk can retaliate if we easily find the dungeon with new claws. If you keep the black magician ice spells, so you can definitely win in a couple of rounds. Another thing you should probably do is move them to the back, especially the black wizard and the red wizards too, if they have enough high-level magic MP. The Windows update prank can easily trick someone when opened in full screen. It looks and acts like a real install page.