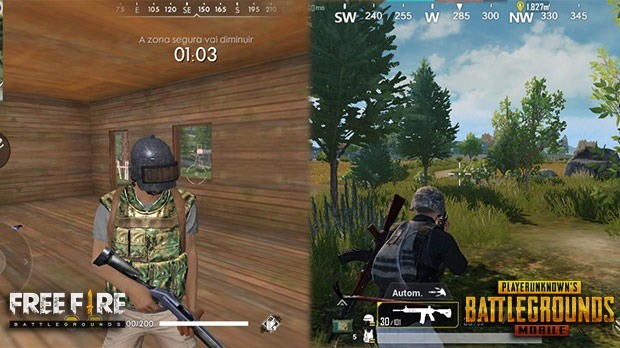 PlayerUnknown's Battlegrounds (PUBG) and Free Fire Battegrounds are probably the best Battle Royale- style mobile games . At first glance they look the same, but there are points that set them apart. Free Fire Battlegrounds is quite PUBG-inspired, with some fundamental differences. PUBG started out as a PC game while Free Fire was always designed for mobile use. Both games have advantages and disadvantages. Check out our guide and find out which of these Battle Royale games is right for you.

PUBG Mobile and Free Fire are free for Android and iOS. Free Fire is lightweight , running on very modest devices like a Galaxy J1 mini. PUBG needs a much more powerful device to run smoothly.

In Battle Royale games, a set number of players start out without equipment or weapons and try to survive in a hostile environment, facing other players, until there is only one winning player or team left. PUBG opposes 100 players , just like its PC version, with matches that can last almost 30 minutes . Free Fire matches last a maximum of 10 minutes with 50 players . Of course, Free Fire created this mode to speed up the game by forcing players to clash. This makes for an action packed game but with less strategy. PUBG has access to three maps, Erangel , Miramar and Sanhok exactly the same as the PC version. It is important when exploring the map in PUBG to ensure a vehicle not to be caught by radiation due to its massive size. Free Fire, Bermuda and Purgatory maps are much smaller , with less vegetation and differences between zones. PUBG started out as a Arma 3 mod and there has always been great care in getting weapons that shoot realistically . The recoil and bullet drop are very similar to the PC version. In Free Fire, this kind of detail has been greatly simplified because the shooting distances are shorter. There is a greater difference in the type of firing between different weapons in PUBG . For example, in PUBG an AKM and an M416 are very different weapons, despite being the two assault rifles. In Free Fire, weapons of each type are relatively similar in type of fire with the biggest difference being the damage they deal. The weapon extras you can get from PUBG are varied and improve different parts of the weapon. In Free Fire, the extras help with recoil and ammo, but the improvement is not significant. In PUBG, there is a greater variety in the type of throwing explosives. There are smoke grenades, offensive grenades, molotov cocktails and stun grenades. In Free Fire, it is only possible to use offensive grenades. There are different types of PUBG dressings (bandages, bandages, painkillers) and ways to increase your sprint speed as energy drinks. In Free Fire, there are only Medical Kits, all the same, with the same healing ability, without limit.

Ranked matches are always present in PUBG from a certain level. Free Fire later also enabled this mode, making it possible to compete with players from around the world. Both games increase your score and experience depending on eliminations, place won in the game, time survived, distance and other details.

In Free Fire, there are 5 characters with special abilities. Throughout your playing career, you can access new fragments of each character's story, increasing the power of your skill as well as personalizing your equipment at a cosmetic level. In PUBG, there are no different characters, just the player's avatar, which can also be changed with clothes and props.

If your mobile device is not very modern, you may not be able to run PUBG with very basic graphics. In this case, Free Fire will be the best option. With shorter matches and fewer players, Free Fire also takes less time, often packed with a lot of action. On the other hand, if your device allows it and if you prefer more tactical games with bigger maps, along with a wide range of weaponry and items, PUBG will be a good choice. PUBG is more realistic in the aim and shape of the weapons, though slightly more difficult, with much longer matches.