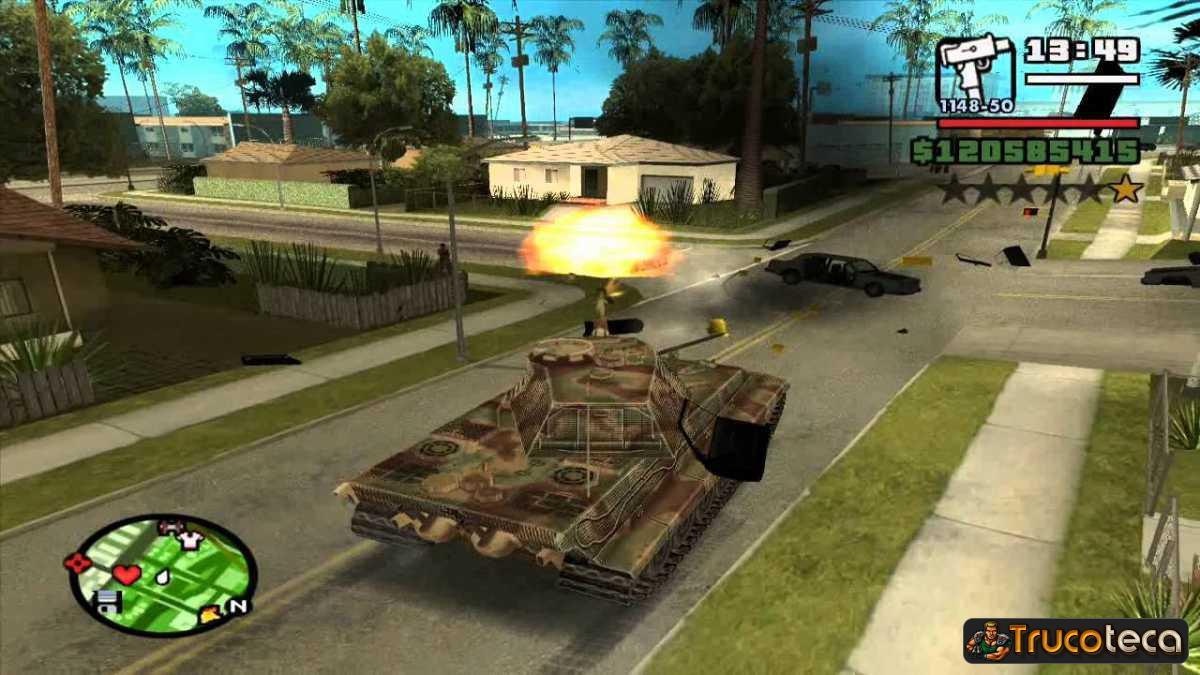 Compilation of the best tricks for GTA: San Andreas in its PC version. All of them are updated, including the newest ones that have been discovered. To activate them simply write them down during the course of the game . You do not need to access the pause menu, nor is it necessary to use capital letters. Some codes have two alternatives, being able to use the one you prefer.

WANRLTW or FULLCLIP : Infinite bullets. In addition, you will not have to reload weapons. LXGIWYL : Get the first weapon pack. Includes: 9 mm gun, shotgun, micro SMG, AK-47, rifle, Molotov cocktails, flare gun, spray paint, a mitten and a baseball bat. PROFESSIONALSKIT or KJKSZPJ : Get the second weapon pack. You will have: Desert Eagle pistol, Sawn-off combat shotgun, knife, Tec 9, M4, extinct, sniper rifle, flamethrower and grenades. UZUMYMW : Get the third weapon pack. Includes: a combat shotgun, chainsaw, silencer gun, MP5, Stinger, M4 and the explosive C4. NCSGDAG : Whatever weapon you select, you will use it at the 'killer' level. BAGUVIX : CJ will be invincible. HESOYAM : The most sought-after trick, since it not only fills in health and armor, but also grants you $ 250,000. GOODBYECRUELWORLD or SZCMAWO : CJ will end his life by committing suicide.

RIPAZHA : Cars fly. Each time you accelerate the car will rise. AFSNMSMW : Boats capable of flying. When you accelerate a ship it will rise and you will fly with it. Larger ships will not be able to fly. FLYINGTOSTUNT : Fly in a plane. JUMPJET : The 'Hydra' fighter appears in front of you, the best San Andreas plane. URKQSRK : Do stunts in the sky with this little Stunt plane. AIYPWZQP : A parachute is added to your inventory. OHDUDE : Instant appearance of a Hunter helicopter. YECGAA or ROCKETMAN : The inventory goes on to have a jetpack. KGGGDKP : Water slider 'Vortex Hovercraft'. You can drive it by land and sea. JBGVNB : All cars will float on the water. JQNTDMH : It generates a quite resistant rancher. KRIJEBR or CELEBRITYSTATUS : A limo or 'Stretch' car appears. VROCKPOKEY or PDNEJOH : Get the fast race car 'Hotring Racer 07'. VPJTQWV : Get another 'Hotring Racer 07' with a different visual style. WHERESTHEFUNERAL or AQTBCODX : Appearance of a funeral car or 'Romero'. OLDSPEEDDEMON : Get the first version of the 'Bloodring Banger'. CQZIJMB : Trick to make the second version of the 'Bloodring Banger' appear. MONSTERMASH or AGBDLCID : A monster truck, versatile 4 × 4 with huge wheels. AIWPRTON : The most desired vehicle: a tank. FOURWHEELFUN or AKJJYGLC : Cuatriomoto, popularly known as quad. TRUEGRIME or UBHYZHQ : A garbage truck appears. AMOMHRER : Drive a huge truck with a fuel tank. RZHSUEW : Golf cart to drive on the roads of San Andreas or wherever you want. ITSALLBULL or EEGCYXT : Excavator or Dozer with which you can sow chaos. BUBBLECARS or BSXSGGC : When crashing into another car both vehicles will float rising in the skies. JCNRUAD : The vehicle you drive will become indestructible. If you hit any other vehicle, it will explode. CPKTNWT : Explosion that affects all cars on stage. That is, all the cars around you will explode. Do not get near a car as you will die of the great impact. WHEELSONLYPLEASE or XICWMD : From now on cars will be invisible, except motorcycles. VKYPQCF : Installs nitrous oxide in taxis. SPEEDFREAK or COXEFGU : Now cars will have nitrous oxide turbo. The nitro is limited and to recharge it you will have to get out of the car and get back up. STICKLIKEGLUE or PGGOMOY : Cars will adhere to the road as much as they turn, so they will turn much more. YLTEICZ : Vehicle drivers will be tremendously aggressive. ZEIIVG : All traffic lights will be green, no matter what. IOWDLAC or AGRUJRYMNOL : Every vehicle that appears in San Andreas will be black. LLQPFBN or AGRUXVHIQYH : All San Andreas vehicles will be pink. BGKGTJH or EVERYONEISPOOR : Street traffic will cover only very economical models, so we will only see utility or austere vehicles. GUSNHDE or EVERYONEISRICH : On the contrary with respect to the previous trick: the cars of the game will be luxurious and the supercars faster. GHOSTTOWN : Vehicles disappear from the streets, as do pedestrians. NATURALTALENT : You can drive any vehicle with maximum skill. CJPHONEHOME or JHJOECW : Ability to jump high-altitude riding on BMX or any bicycle. OUIQDMW : Allows you to shoot accurately while driving a car.

AJLOJYQY : Generalized madness. STATEOFEMERGENCY or IOJUFZN : All pedestrians fight each other. BAGOWPG : Passersby will attack you for no reason. BGLUAWML : Each pedestrian with whom you cross will have a weapon in his hand and will try to liquidate you. FOOOXFT : Same as the previous trick but without being attacked by pedestrians. NINJATOWN : All passersby will be dressed as ninjas and will wear katanas. CIKGCGX : Pedestrians with swimsuits and other beach elements. CRAZYTOWN or PRIEBJ : Both the protagonist and all the characters are dressed as clowns. FVTMNBZ : Pedestrians dressed in country. The vehicles will also be rural, as if we were in a town. BMTPWHR : Skins for CJ and others industrial style. All pedestrians and rural vehicles will acquire the Born 2 Truck. BLUESUEDESHOES or ASBHGRB : Pedestrians will become copies of Elvis Presley. BIFBUZZ : There will be band members all over the map. MROEMZH or ONLYHOMIESALLOWED : Same effect as the previous trick but only with members of your group. SJMAHPE : Recruit passersby, who will have a gun. ROCKETMAYHEM or ZSOXFSQ : Pedestrians join your cause, all having a rocket launcher.

TESTEDUCATIONALSKILLS or AEZAKMI : Whatever you do, no police will go after you. TURNDOWNTHEHEAT or ASNAEB : Say goodbye to the search stars. The police will not look for you anymore and all the police stars you have will disappear. TURNUPTHEHEAT or OSRBLHH : Two stars are added to the police search marker. LJSPQK or BRINGITON : The police will look for you with the maximum level of stars (6 stars). The 'wanted' marker is filled with all possible stars.

AUIFRVQS : It rains throughout the game. MGHXYRM : A thunderstorm is activated. CWJXUOC : A sandstorm takes place. AFZLLQLL : The sun shines on stage. ICIKPYH : The intensity of the sun is maximum. ALNSFMZO : The cloudiness takes over the sky without causing precipitation. CFVFGMJ : Cloudy and unstable meteorology. OFVIAC : It will be 9 o'clock at night and the sky will present an orange hue. NIGHTPROWLER or XJVSNAJ : The clock will always show 12 o'clock at night. PPGWJHT or SPEEDITUP : Activates the fast camera. SLOWITDOWN : San Andreas in slow motion. MUNASEF or ANOSEONGLASS : It will increase your adrenaline level. YSOHNUL : Make the clock go faster.

BEKKNQV : CJ will attract all the women in the game. HELLOLADIES : Similar effect, since it maximizes the level of attractiveness of the protagonist. WORSHIPME : The main character will have the full bar of respect. KVGYZQK : Make CJ lose weight a lot. BUFFMEUP or JYSDSOD : Protagonist with spectacular muscles. BTCDBCB : Without needing to feed him, the protagonist will gain weight to maximum levels. AEDUWNV : CJ will never have the need to eat. VKYPQCF : Trick to last longer by doing physical actions, since it maximizes the level of resistance. CVWKXAM : You can dive as much as you want: you will never run out of oxygen. STINGLIKEABEE : CJ gives very powerful punches. LFGMHAL or KANGAROO : It allows you to jump much higher than normal.

You have all the GTA San Andreas reward locations available on the following maps. - Get 40 horseshoes and you will unlock elite weapons. - Get 50 photos and you will unlock another military pack. - When you get all the oysters , all the girls in the city will love you.