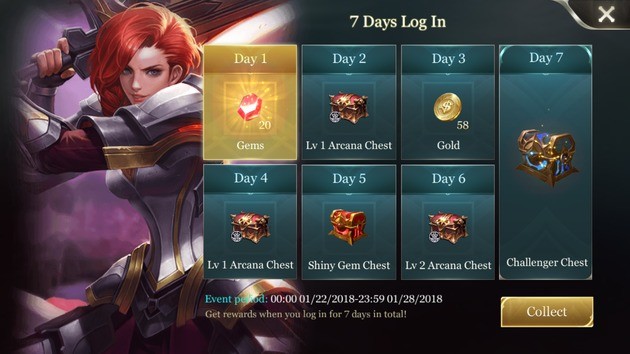 Anyone who likes MOBA games has certainly played Arena of Valor . This is one of the best games of its kind for mobile , mainly because it is very competitive and offers players a huge challenge level. But if you are one of those who have mastered the basics and want to become a professional in the game , you can not fail to check out our advanced Arena of Valor tips now !

1. Choose your favorite role and always play with it

If you are a beginner in Arena of Valor , it is obvious that the most recommended is to try all the functions that the game allows you to try. So play a little giving support, then play as a healer, act as a sniper and play as a tank. Only after discovering which role you most identify with will it be possible to develop your skills in it. This is one of the most important attitudes of professional Arena of Valor players . Especially when the game has become one of the most played in the world of e-sports and competitive games . When you get used to your own style of play, focused on a role within the arena, it is easier to develop your full potential as a player .

2. Meet the heroes of the game

This tip is closely linked to the previous tip. There is no point in discovering your favorite role if you use any hero to play from it. A very common mistake of beginners in Arena of Valor is to choose your character based on aesthetic issues. Visual cool , beautiful armor or legal weapon: none of that matters if you want to always come out the winner in competitive matches of the game. Say, for example, that you choose a visually "big" character, which is a tank, to use it offensively. You will be making a mistake, as, despite the scary appearance, the tanks are more defensive. So spend some time reading about all the heroes in Arena of Valor , but mainly about the roles of each one. We can tell you, for example, that if you want to be the player who always goes out to fight, it is best to choose a warrior. Anyone who prefers a more stealthy approach should use a killer, keeping in mind that it is easier to be shot. Wizards are great at launching explosive and highly damaging attacks, however they are more efficient if they stay a little far from the battle.

3. Be aggressive, but with strategy

MOBA games usually require their players to be aggressive. After all, the best defense is attack. But those who think that the best offensive approach is the one without strategy are mistaken. Pressing the buttons and quitting or sending spells anyway is a mistake. It may even work, but most of the time it ends up not being the case. In Arena of Valor , therefore, the best thing to do is to devise an attack strategy. Looking around the arena and seeing how quickly enemies are positioned is a smart move. Try to check what types of opponent you have in front of you. Seek the weakest ones first and immediately try to attack them with everything. Surrounding or cornering a hero is an attitude that can bear fruit, especially at the start of a fight. Don't worry so much about losing hit points, as it is likely that a healer will give you that help . All of this, of course, if you are a player who has a more offensive role in the team.

In online games, communication between you and other players is often essential. In MOBA games this is even more important, but not exactly for socializing. The idea of chatting with your teammates is precisely to transform your attacks or your defense movements into coherent and precise movements. So you should not refrain from using the action buttons in the upper right corner of the game screen. There are several options for action they allow you to take. It is possible to request that teammates retreat from an attack or that they go all out for opponents. In a MOBA like Arena of Valor , teamwork is simply essential. If you think that these action buttons are not enough in terms of communication, no problem. The game has a text chat bar . Another option is to use a headset to speak and listen to your war colleagues.

5. Buy new equipment and upgrade the ones you already have

This tip is almost entirely explained by the title. This is because as you evolve in the game and improve your way of playing, all your equipment may be outdated. Sooner or later you'll find that both your weapons and armor don't seem to match your abilities. The more experienced players do not hesitate, therefore, to spend much of the gold they have in improving their equipment. Those who are more attached to their equipment usually prefer to upgrade them to the maximum instead of exchanging them for new ones. On the other hand, we recommend that you visit the game's online store frequently and take a look at everything it can offer you. You will not always find what you are looking for, which is not a cause for despair. The store updates from time to time, in addition to the game having a help system, which indicates the best items to buy for your hero.

Another thing that professional players do is to customize their "Skill Tree". There is more than one way to progress your hero and guarantee him new skills in Arena of Valor . Much of it ends up choosing its own branch of evolution, which ensures that your hero ends up becoming more unique in relation to the others. This is possible using the Change feature .

Every player, whether new or not, knows that redeeming daily rewards is essential in Arena of Valor . To do this, just log in once a day and play with the game for a few minutes. That's enough for the game to give you access to daily rewards. Remember that in addition to these " login prizes " there are other things that you can win just by playing Arena of Valor . Whoever plays at least three games every day, for example, increases their chances of unlocking more heroes.

Jungling is a very advanced technique that requires confidence in its potential, as well as communication with the team. It consists of making a switch between your line of position and between the others. That way it is as if you are in control of all the attack and defense lines of the group. But what is the advantage of this and why does it require confidence in its potential? First because you will have to support your teammates or a specific hero, but amid both enemies controlled by other players and those controlled by AI. It is necessary, then, that your hero is powerful and that you can deal well with facing several enemies at the same time. AI controlled creatures often vary in level. The stronger ones may require a lot of power as a jungler . At the same time, these same creatures give very powerful buffs that can benefit the entire team. In such cases, it may be that the team needs more than one jungler at the same time, requiring communication between all its members.

Not everyone likes to have a Rambo on their team. That player who starts the game by going into attack in an uncontrolled way is usually one of the most hated in MOBA games. So know when it is necessary to move and when you should just stand on your line of attack. This is in line with what we talked about above about being a jungler . The jungler is usually chosen at the start of the match, usually via chat . If you are not responsible for jungling , respect your line of action so as not to break the team's consistency. If you get out of your line too much, you will leave the team unprotected. Exit only when you need to support another friendly player. Otherwise, wait for an enemy to appear before you to take a more offensive attitude. As always, in an online game like Arena of Valor , the best thing is always to create dialogue with other teammates.

10. Realize when indentation is the best way

Not all Arena of Valor players know, but there is a much greater reward for those who deliver the final blow, which will end the game. It takes a lot of luck, timing , skill and focus for you to be that player. Usually whoever gets the last hit acts like the Rambo we mentioned above, a somewhat suicidal attitude. That's because there are almost always enemies hidden behind towers, in the midst of bushes or traps waiting for you. When this is the scenario, the chances of you taking damage for nothing are enormous. In these cases, the best thing is to retreat to your base. There is no shame in that. The most experienced players know that recovering your energy is the most correct. So you can return to the battle with full force, without harming your teammates.