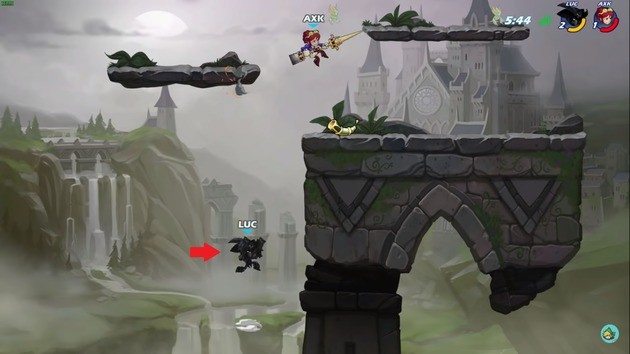 Brawhalla is a fighting game very different from most. Highly inspired by the Super Smash Bros. series, the game has several mechanics that are not common in other games of the genre. Thinking of those who are not yet the best players in the neighborhood, we bring you 5 essential tips on how to play Brawlhalla!

1. Keep track of the map

2. Learn the hitboxes and hurtboxes

Hitbox and hurtbox are two very important concepts in Brawlhalla. Hitbox is the area of action for a given hit, encompassing the place and time when the hit actually happens. Hurtbox is the area where your character needs to be touched to take damage. So, to do damage, your hitbox must hit the opponent's hurtbox. Often the hitbox and the hurtbox do not match the animation of the characters and moves. For example, when you pick up a hammer and use a blow, you see the hammer reaching a certain point, but maybe the blow schedule only reaches halfway through the animation. In that case, you would see the hammer touch your opponent, but he would suffer nothing. To learn all the hitboxes and hurtboxes and not feel stolen when something strange happens, go to training mode and turn on the options "Show Hitboxes", "Show Hurtboxes" and "Enable Items". Then, spend time just attacking, moving and using items and take a good look at the marked areas. Now learn how to perform combos in Brawlhalla!

3. Be patient when returning to the platform

Beginning players tend to despair and get back to the platform in the fastest and most predictable way. This is not you. Be patient and always vary your recovery. Remember that if you touch the wall under the platform, you will recover all your jumps. In addition, aerial dodges are recovered every 3 seconds, so take your time and don't be in a hurry to return. The important thing is to vary so as not to be punished.

4. Be careful when using ground pounds

In Brawhalla, ground pounds are blows performed by pressing the strong attack button while holding down in the air. Its best use is to punish wrong attacks or during edge guards (when you try to stop your opponent from returning to the stage). It turns out that several ground pounds, when touching the ground without hitting anyone, leave the player extremely vulnerable. So use them carefully during the game and try not to abuse them.

5. Watch your replays as well as professional matches

The truth is that you play much worse than you think. Whenever you watch your own matches you will notice various addictions, mistakes and other possibilities for improvement. How many times have you died for the same movement? How many times have you reacted much slower than you should have? All of these things can be fixed if you spend time analyzing your matches. It is also important that you watch high-level matches. This way you will be up to date with the current metagame and what your character is capable of.