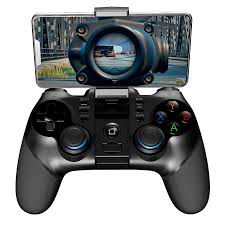 Mobile games are getting closer to console games, so the demand for compatible gamepads is increasing. In this context, Ipega controls are the most requested, and are considered by many to be the best to play on Android and IOS. However, not every game already supports gamepads, and to help you decide whether or not to buy one, check out a list of 15 iPega-compatible Android and iOS games below!

The classic GTA San Andreas needs no introduction. The success of the Playstation 2 was launched for mobile phones and is, until today, one of the most accessed games. With full Ipega compatibility, the game is perfect for nostalgic gamers who want to control CJ on the gamepad once again. Download for Android / Download for iOS

Without doubt one of the most popular shooter games for mobile phones. Prior to Call of Duty Mobile, Modern Combat was actually called “Call of Duty for Mobile”, and has a large arsenal of weapons, accessories and vehicles. Modern Combat 5 is a classic FPS with solo campaign and multiplayer mode. The campaign takes place through missions with an average duration of 5 to 10 minutes and the multiplayer has various modes (solo, teams, flag capture, countdown and many others). Modern Combat 5 is the first in the series to include a class system. Thus, each character has specific advantages and abilities, allowing each player to choose according to their style. A disadvantage of Modern Combat 5 is that you can only play when connected to the internet, even in solo campaign mode. Download for Android / Download for iOS

Despite its name, Asphalt Xtreme contains everything but asphalt. This racing game is focused on offroad courses, whether in the desert, ice, forest or any other rugged terrain. In all the player has 35 vehicles, 400 events, 500 challenges and other modes that are launched for a limited time. The game has online and offline options. Download for Android / Download for iOS

One more race. Real Racing 3 lives up to its name and is one of the most realistic racing games at the moment. The game is extremely beautiful and all content is based on real elements, from well-known brand cars to tracks that are replicas of real tracks. Real Racing 3 has over 100 cars to unlock and over 2000 events to participate, featuring different modes and rules in each race. Download for Android / Download for iOS

Dead Trigger 2 is the typical zombie horror FPS in which the player must complete major and minor missions in a monster-ravaged world. The graphics are PC-worthy and the scenarios differ greatly from each other as the character travels the globe. Unlike the first game in the series, Dead Trigger 2 is not repetitive as missions and zombies are quite varied. Gameplay is simple and the control options are customizable. Download for Android / Download for iOS

Shadowgun Legends is a shooting game with many RPG elements. The options for playing alone are very good since you can interact with almost anything you see. However, the differential of the game is being able to play with others, both in PvP (player vs player) and in cooperation. The raid system allows you to team up with other players to defeat bosses too strong to kill yourself. This in itself is incredible news in the midst of FPS games. In addition, Shadowgun Legends PvP is one of the best of its kind, containing 6 different options for you to challenge your skills against other players. Download for Android / Download for iOS

Shadow Fight 3 is a little-known fighting game that can surprise many fans of the genre. The game has great graphics, interesting visual identity, charismatic characters and good gameplay. Unlike many mobile fighting games, Shadow Fight 3 has several command buttons that allow a good range of moves, dodges, defenses, combos, etc. To make things easier, the game has a very didactic tutorial to familiarize you with all the commands. Shadow Fight 3 has about 30 characters with unique moves and characteristics. In addition, you need to unlock equipment such as weapons, armor and helmets, and equip them the way you want. Download for Android / Download for iOS

Another of fighting. The King of Fighters '98 offers an impeccable classic KoF experience. The game has simple graphics characteristic of the series and has very good gameplay. The combos were not facilitated just because the game is mobile, so you will need to really train them. The King of Fighters '98 is the perfect fighting game to play with friends. It's competitive, it's deep and it still has multiplayer support via bluetooth. Download for Android / Download for iOS

Another game that needs no introduction. FIFA Mobile is one of the most complete mobile football games on the market, featuring multiple modes, hundreds of events, multiplayer support and more. Download for Android / Download for iOS

Dead Effect 2 is one of the deepest mobile shooter games. The game features an incredible 20-hour solo campaign, beautiful graphics, and an RPG-style character system where you level up as you gain experience. The game doesn't innovate much in the FPS genre but has some fun interaction mechanics. For example, you need to put your finger on the screen for your character to scan the fingerprint to open some doors. No big deal, but still interesting. What sets Dead Effect 2 apart from other FPS for Android is the well-crafted story that makes the game a great option to hold you for a long time. Download for Android / Download for iOS.

Oceanhorn is the closest we have to play Zelda on mobile phones right now. The RPG is extremely inspired by the Nintendo classic and features beautifully crafted graphics and a catchy visual identity. Despite its simple gameplay and very easy puzzles, Oceanhorn is an RPG worthy of its time and offers about 10 hours of gameplay. Also, the game is considered one of the best to play with joystick on mobile. Download for Android / Download for iOS

Visually speaking, Portal Knights is very similar to Oceanhorn and also somewhat reminiscent of Zelda. The game is also an RPG with classic elements, but the difference is that it adds several Minecraft elements, allowing you to destroy everything around you and reshape it to your liking. In Portal Knights you need to advance through a series of randomly generated scenarios. Along the way, you will have to complete quests, level up, farm materials, craft items and so on. Download for Android / Download for iOS

Metal Slug Defense puts all the classic Metal Slug elements into a tower defense game. Defense takes place on a single 2D plane (as with all games in the series), but here you will need to manage your resources, level up units and equipment, and use them correctly depending on the enemy. Overall, it's a good game for those who are homesick for Metal Slug and a Tower Defenses fan. Download for Android / Download for iOS

Magic Rampage is a 2D platform game with RPG elements. The graphics are cartoon style and the gameplay is very simple: you just walk, jump and attack. However, as you progress through the game, new "secret" mechanics are released by combining the few existing commands. Magic Rampage has very personalized stages and secret areas to discover. The game also features an inventory system where you can combine and sell items, different classes, weapons, upgrades and other RPG traits. Download for Android / Download for iOS

Finally a battle royale, but don't get too excited. Rules of Survival does not offer the same gaming experience as PUBG, Call of Duty Mobile or even Free Fire. Despite the gameplay that is very similar to others, the game still has several translation flaws, minor bugs and strange interactions. We chose to put it on the list because it is the only name battle royale that supports Ipega. Download for Android / Download for iOS