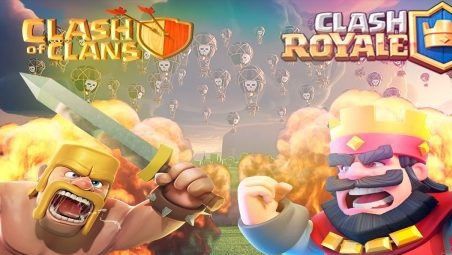 Clash Royale and Clash of Clans are two great successes from developer Supercell. Despite the similar names and the common development, the games are very different from each other. Considering that both are extremely addictive, it is important that you know the characteristics of each one to know which game to invest in. Check below 6 differences between Clash Royale and Clash of Clans to choose wisely!

This one is for those who still don't know anything about Clash Royale and Clash of Clans: the games are not of the same genre. Clash Royale is a card game that combines elements of MOBAs and Tower Defense, while Clash of Clans is a game of strategy and administration of armies and buildings, style Warcraft, Starcraft or Age of Empires. In Clash Royale, the objective is to destroy enemy towers using the units summoned by the cards. In Clash of Clans the objective is to constantly upgrade your village and engage in combat with other players' villages. Both games require strategy.

Progress in Clash of Clans is much more constant and apparent than in Clash Royale. That's because, in Clash of Clans, you can progress at all times since there is always (always!) To improve, whether it is making gold and elixir, making upgrades, making troops, etc. So, even if you play a little time a day, you will always feel that the session ended better than it started. In Clash Royale, on the other hand, progress occurs through the chests received with victories and, to open each chest, it is necessary to wait a few hours. In addition, players can only have four chests at a time, meaning you will only receive chests again when one of the four is opened. This system allows you to play several games without the possibility of really progressing in the game.

In terms of microtransactions, Clash of Clans is the game that “takes it easy”. It is possible to play it normally without spending money without feeling at a disadvantage with the players who do. Of course, the transactions present in the game contribute a lot to the advancement of paying players, but the advantages obtained are not as drastic as in Clash Royale. In Clash Royale, players who are willing to pay receive almost ... unfair advantages. Some estimates made by American players have shown that $ 100 paid in the game is equivalent to 5 months of progress in the game. Considering that it is necessary to wait hours to open each chest, the money invested greatly accelerates the progression.

By the very nature of the games, Clash of Clans has more complex mechanics than Clash Royale. The first has countless types of buildings, troops and upgrades, making the content to be learned very extensive. In total, the game requires more time to master. Clash Royale is not as complex as Clash of Clans, but it is also not simple. The game even has international competitions with high level players, which shows that the title can indeed require time and skill to be mastered.

Clash Royale and Clash of Clans also differ greatly in the level of skill required to play. In this sense, Clash Royale, being a competitive game, stands out a lot and is able to clearly demonstrate who is the best player. Thus, in a match between players with identical decks, the player with the most skills will always win.
Clash of Clans, on the other hand, does not have this competition content and does not have satisfactory criteria to define the skill of the players. All actions in the game require more grind (playing constantly) than skill. Thus, a player with more resources, for example, is not necessarily more skilled than another.

When it comes to innovation, Clash Royale takes advantage, by far. The game managed to bring together elements from three different genres very successfully. In it you will play a little MOBA and Tower Defense while choosing your cards and improving your deck. In addition, the game receives periodic updates that affect the metagame and force players to adapt, which keeps the game very dynamic. Clash of Clans, however, does not offer great news. The game does not stray too far from the others in strategy and resource / building management. See our Clash Royale tips and tutorials here!