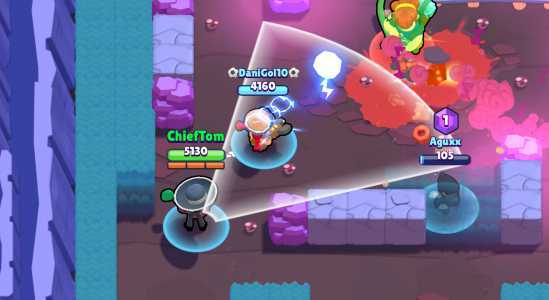 Poco is a rare Brawler known for being one of the supporting characters of Brawl Stars. Its main characteristics are very low damage and its great utility in team fights due to the very open angle of its normal attack and its healing. It is certainly one of the most limited Brawlers since it is only viable in POCOS game modes, but it remains one of the most used. Check out everything you need to know to play a lot of Poco in Brawl Stars!

Dissonance : Poco's normal strike causes very little damage to isolated opponents but its very wide angle (the shots form a very wide cone) allows Poco to hit many opponents at once. Its range is reasonable and allows a safe distance from opponents to be maintained. The damage of the blow is independent of the distance traveled. What is special about the coup is the very low cooldown between shots. It is possible to spend all three ammunition extremely fast to do their full damage using autofire. In addition, the cooldown is also fast, so Poco can remain active most of the time. (Super) Bis! : Carl fires a shot through walls and has an even wider angle than his normal attack. Projectiles heal all partners in range. The attack also automatically effects the same healing value for Poco. (Star Power) Music Therapy : Causes Poco's normal attacks to heal 500 HP from affected partners.

Tips on how to play with Poco

How to play against Poco

Poco is a very one-sided Brawler (he is only strong in one thing) and with very simple mechanics, so it is not difficult to counter him. Check out these tips: Click here for more Brawl Stars tips and tutorials!