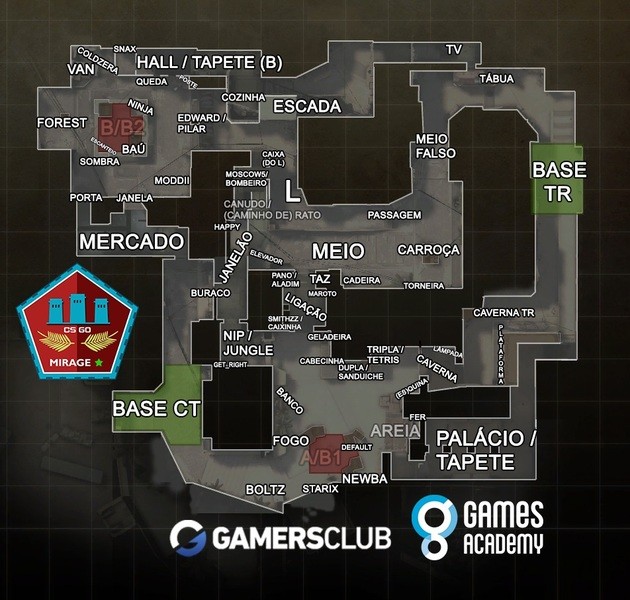 Without proper communication the level of CS: GO matches is always low. Therefore, getting to know the competitive maps and the name of the positions is the first step to play in matchmaking and start the patent increase. As the credits shown in the images, the maps below are produced by Games Academy and Gamersclub. At the end of the article, for those who still don't know, we also explain the rules related to maps in the CS: GO championships. Check out!

Undoubtedly the greatest Counter Strike classic. Dust2 has been in the game since the beginning and remains active in the competitive after some adjustments and updates. Like Mirage, Dust2 is a map basically divided into A, middle and B. Bombsite B is extremely closed and usually requires only one player to defend it. However, when dominated by terrorists, it is considered one of the most difficult to resume in the game. One of the biggest points of interest in Dust2 for terrorists is the control of the Balcony and the Ladder. After winning these points, the TRs can easily rotate the attack between A and B according to the decisions taken in the middle of the round. Even though the Balcony is such an important point, the biggest point of contact on the map is the Fund (including the Corner, Hole and NBK). It is very common for the CT to send three players at the beginning of the round to gain control of the area, leave only one defender and then return, similar to what happens at Banana na Inferno.

Another great classic in the game. Like Dust2, Inferno has been present since the first versions and has already received several touches. As with other maps, Inferno's bombsite B is very susceptible to rushes. However, the path to him (Banana) is the most contested area among all maps in the game. It is now common for teams to send three defenders to throw grenades in the beginning and try to delay the terrorists' hold. Eventually the control of the Banana and the Car / Cement is obtained by the terrorists, so the main objective of the TC in the area is to ensure that the TR pay dearly for it, whether with deaths or, at least, with many grenades used. The path to A is more open. Generally, terrorists are distributed between at least two of the three paths: NIP, Xuxa and Varanda. In defense, two players are usually dedicated to B and three to A. However, a defender who has full view of Banana is enough to maintain the bombsite, in view of enough time to step back and call for reinforcements. In these scenarios, it is common to see four players defending A's entrances, and the player from Arco is responsible for returning to B when necessary.

Mirage, like Dust2, is a type A, middle and B map. The biggest point of interest is the Middle, including everything around it: Passage, Cart, Elevator and L. For terrorists, control of the Middle means that the team can attack any bombsite from more than one side. Bombsite A is the target of several different executions (smokes can cover all lines of defense, isolating the CT) and one of the easiest to resume in the game. Therefore, it is common for many teams to give up the plant and then organize retake , instead of actively defending the bombsite. With regard to defense, the most common formation is 2-1-2. As Janelão is constantly smoked, it is common for the middle player to be in Ligação, Happy or L.

Train is a map considered favorable for CT, so it is common to see halves ending in 11x4 or even 12x3 for defense. This is because the map is full of open areas connected to narrow passages. Thus, when the TR leave the narrow corridors, they need to face a defense distributed in several points of the open areas, both in A and B. Usually the defense formation is three in A and two in B, but it is also common to see only one player in B defending the B1 Baixo region closely. As soon as he hears any activity, he calls for reinforcements. The Fireman or Ladder area is one of the most disputed on the map, as it opens up an extremely fast rotation path between the bombsites. Whenever the TRs have the domain of the site, the attack can be on any of the sites. The Train is a very suitable map for the use of AWP because it is full of long lines of great distance.

Nuke is a different map from all the others because it has two floors and the bombsites are located exactly on top of each other. For this reason, it is the most difficult map to understand when watching matches. The map is one of the smallest in the game as well as being very closed. Thus, the use of pistols and shotguns is more feasible than on other maps, in addition to encouraging more forced purchases. In terms of map control, CTs need to defend A from within the bombsite. OB allows more space and the defense takes place on the Ramp and in all the corridors between the Secret and the bombsite B. The rotation between the two bombsites takes place through the Duct, so players can automatically descend from A to B in a few seconds.

The biggest competitive map in the game. Combat on the Overpass is different and takes longer than the other maps as the duels can take place, literally, in any region of the map. This is because the Overpass is the most suitable map for CTs to be aggressive and advance the line of defense as much as possible. Thus, it is common to see duels even in the Beco or Bombeiro region, which are almost at Base TR. As the bombsites are very close, the rotation of the defense is very fast, which makes the map more favorable for the CT. Bombsite B is defended, generally, by two players inside the site, but it also allows aggression in the region of the Sewer. The defense in A usually starts advanced in the Bathroom, Background and Canteiro, but is eventually pushed back to the site, where it still has several options. The Link, Metal and the Balloon region are the middle of the map, and whoever has the domain will be able to rotate quickly when necessary.

Vertigo makes its first appearance on the competitive CS: GO scene in 2019 and not even some professional players knew the map before that. So far there is not enough material to analyze the map's metagame, but it is known that it will have similarities with Nuke, considering the short size and the possibility of rapid rotation between bombsites. Check here the main features of Vertigo!

Rules for map selection in championships

In CS: GO championships, the maps to be played are defined by an alternate system of exclusion or choice, varying according to the extent of the match.

Best-of-1 matches take place on just one map that will be defined as follows:

The best-of-3 matches take place on three maps that are chosen as follows:

The best-of-5 matches take place on five maps that are chosen as follows: Complete and updated economy guide in CS: GO! 10 essential tips for those who play competitive CS: GO