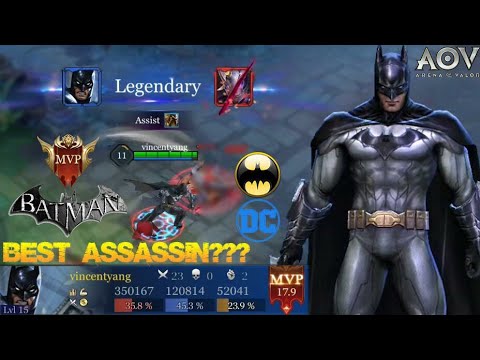 If you are looking for a hero to farm in the jungle, then Batman should be your choice! With this dark hero, you can also jump on opponents when they least expect it and wreak havoc on enemy lines. Check out the best builds, items and Archangels of Batman, the shadow hero of Arena of Valor !

Know the skills of the jungler

With Batman, whenever Batman approaches an opposing hero, his movement speed increases by 20%. This means that you will have an advantage over your enemies during ganks and, especially, if they try to escape a battle.

Batman attacks with the blades of his forearm, inflicting physical damage on all nearby enemies, with one taking double damage. Sharp Gauntlet is very important for quickly decimating waves of minions while you are farming in the jungle.

Batman throws an explosive batarang causing physical damage to his opponents and slowing his movement speed. In addition, the enemies hit are stunned and, if they are attacked again during this effect, Batman restores a percentage of his life. This ability is very useful for killing enemies that are trying to escape, and the fact that you can heal yourself while doing damage is critical to your survival.

Activating the ultimate, Batman is hidden behind a bat colony and becomes invisible for 30 seconds, unless he stays more than 3 seconds very close to an enemy hero. When using this ability again while invisible, Batman flies against the target inflicting physical damage on all opponents in his path. Dark Knight is ideal for initiating attacks , causing damage to several enemies at the same time, but try not to activate it in front of the opposite team, so as not to break the surprise effect.

To be able to easily farm multiple minions with just one hit, you must start by leveling Sharp Gauntlet . Then keep your focus on leveling Batarang so you can attack from a distance. These two skills are essential for Batman to be effective against all types of enemies, whether heroes of physical fighting or ranged attacks.

The best archangels for Batman

The ideal Archangels for Batman are those that improve your armor piercing and those that increase your survival in battle.

Check out this guide to master the game's Arcana system!